AMES, Iowa – In a diplomatic career that spans more than three decades, Nirupama Rao has served as India's ambassador to the United States since 2011. She will discuss relationships between the two countries during the Manatt-Phelps Lecture in Political Science at Iowa State University on Oct. 8.

"United States and India: How Far Have We Come, What Lies Ahead?" will be at 7:30 p.m. Tuesday, Oct. 8, in the Dolezal Auditorium, 127 Curtiss Hall. The ambassador’s presentation is part of Iowa State's World Affairs Series, and is free and open to the public.

From 2009 to 2011, Rao was India's foreign secretary, the highest office in the Indian Foreign Service. Having served in the East Asia Division of the Ministry at policy-level capacities for several years, she acquired extensive experience in India-China relations, and was India's first female ambassador to China from 2006 to 2009. Rao's other ambassadorial assignments included Peru, Bolivia and Sri Lanka. She also was deputy chief of the mission in Moscow in the late 1990s, and minister for press and cultural affairs at the Indian Embassy in Washington, D.C., from 1993 to 1995.

"Iowa State University is extraordinarily privileged to be able to welcome the ambassador of the world's largest democracy to our campus," said James McCormick, political science professor and chair. "With her background and experience in global affairs, Ambassador Rao's lecture on the evolution of U.S-Indian relations will be particularly timely and important, especially as American foreign policy pivots toward Asia in the years ahead."

Charles and Kathleen Manatt and Tom and Elizabeth Phelps established the annual Manatt-Phelps Lecture in Political Science in 2002. Each fall, the lecture brings to campus a prominent scholar or practitioner in the area of political economy.  The lectures have featured distinguished leaders from America’s closest trading partners —Mexico’s Secretary of Foreign Affairs and Canada’s former Minister of Foreign Affairs — and distinguished ambassadors from crucial American allies and friends — France, Germany, Japan, Spain and Sweden.

The event is also co-sponsored by the Office of the President, College of Liberal Arts and Sciences, Department of Political Science, World Affairs Series and the Committee on Lectures, which is funded by the Government of the Student Body. 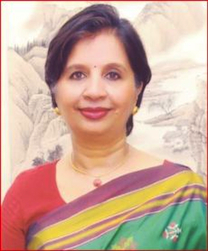 "United States and India: How Far Have We Come, What Lies Ahead?"