Over the limit: ISU researchers test how size, shape and color of wine glass affect how much you pour 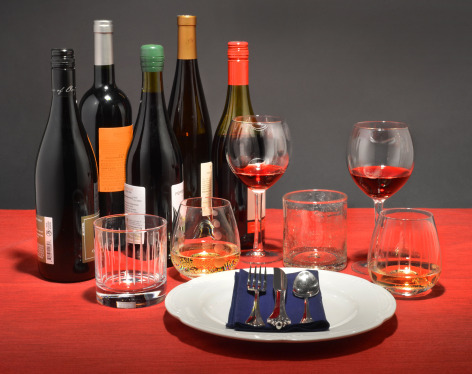 Iowa State researchers tested how the table setting and the size or shape of a glass influences how much wine you pour. Photo by Bob Elbert (Larger photo)

AMES, Iowa – Pouring a glass of wine is rarely an exact measurement, especially in a social setting. While most people think of a glass as one serving, in reality it could be closer to two or three. Just how much one pours is influenced by a variety of environmental factors, researchers at Iowa State and Cornell universities discovered, and that could have serious consequences when it comes to overconsumption.

In the study, published in Substance Use and Misuse, participants were asked to pour what they considered a normal drink using different types of glasses in various settings. The results show how easy it is to overdo it. Participants poured around 12 percent more wine into a wide glass than a standard one. The same was true when holding a glass while pouring compared to placing the glass on a table.

“People have trouble assessing volumes,” said Laura Smarandescu, an assistant professor of marketing at Iowa State. “They tend to focus more on the vertical than the horizontal measures. That’s why people tend to drink less when they drink from a narrow glass, because they think they’re drinking more.”

Researchers tested six environmental cues to understand how each influenced the amount poured. The contrast between the glass and color of the wine also made a significant difference. For example, when pouring white wine into a clear glass, participants poured 9 percent more than pouring red, which had a greater contrast to the glass. The influence of a small and large table setting was not as strong.

Wine is different from alcoholic drinks that are served in a bottle or measured with a shot glass, making it easy for individuals to over pour. A standard serving of wine is 5 ounces, according to the National Institute on Alcohol Abuse and Alcoholism. But Doug Walker, an assistant professor of marketing at Iowa State and lead author of the study, said it’s easy to lose track of how many drinks you’ve had, if you are pouring more than you realize.

“If you ask someone how much they drink and they report it in a number of servings, for a self-pour that’s just not telling the whole story. One person’s two is totally different than another person’s two,” Walker said. “Participants in the study were asked to pour the same amount at each setting, but they just couldn’t tell the difference.”

Efforts to lower obesity rates have generated greater awareness about portion control when it comes to food. The creation of 100-calorie packs and visual aids, like a deck cards to measure 3 ounces of meat, make it easier to limit a serving size. Brian Wansink, director of the Food and Brand Lab at Cornell, said it is just as easy to help people drink less.

“If you want to pour and drink less wine, stick to the narrow wine glasses and only pour if your glass is on the table or counter and not in your hand – in either case you’ll pour about 9-12 percent less,” Wansink said.

Unlike eating too much, there are more immediate and serious consequences associated with drinking too much. Smarandescu said people will often rely on internal cues, such as a full feeling, when eating, but that doesn’t work with drinking. The study demonstrates the need to educate people about how to measure a proper serving size of alcohol, she said.

Raising a glass to awareness 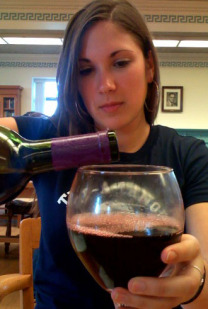 Study participants were asked to pour what they considered a normal drink. Photo by Brian Wansink (Larger photo)

Eliminating all bias to guarantee a perfect serving size is not practical, but making wine drinkers aware of environmental factors can limit the extent to which they over pour. To better understand this impact, researchers asked participants to identify which factors may have caused them to pour too much. The factors that ranked highest, such as the wide glass, were those with the greatest influence on pouring.

“The fact they were able to know retrospectively, but they still poured different amounts, told us they didn’t think about it when pouring. Otherwise, they would have adjusted. So they had to be prompted to think about how much they poured,” Walker said.

Researchers add that even though participants could identify those environmental factors, it does not suggest they knew how much more they were pouring to accurately track their alcohol intake.

Pouring a glass of wine is rarely an exact measurement, especially in a social setting. While most people think of a glass as one serving, in reality it could be closer to two or three. Just how much one pours is influenced by a variety of environmental factors, researchers at Iowa State and Cornell universities discovered, and that could have serious consequences when it comes to overconsumption. 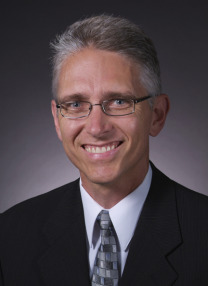 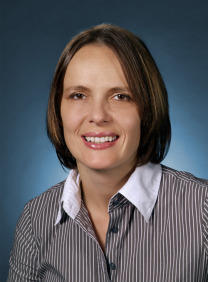 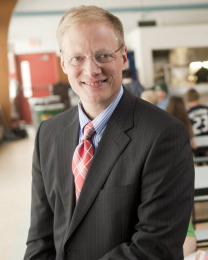