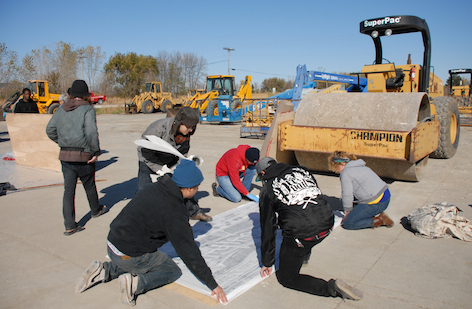 Students in ISU Professor April Katz’s fall 2013 relief printmaking class and Augustana College Associate Professor Scott Parsons’ printmaking classes have spent the first half of the semester carving original designs on birch plywood blocks and full-size MDF (medium-density fiberboard) sheets, which they will print onto fabric by driving a steamroller over the inked wood.

This is the fifth year that Iowa State and Augustana, Sioux Falls, S.D., have joined forces for the event, which will be from about 10 a.m. to 4 p.m. at Rueter’s, a construction and equipment dealer at 5815 Lincoln Way in Ames. (Rain date is Oct. 18.) The public is invited to watch the printing process.

“Monumental woodcut prints were created from multiple plates by Albrecht Durer in the 16th century. Our prints are inspired by his work, including his largest, ‘The Triumphal Arch,’ which was about 9-feet-8-inches by 11-feet-8.5-inches,” Katz said.

Dwyer is creating a landscape image for her block. Lee’s will feature an abstraction of Nigerian women’s hats that will be printed over hand-dyed fabric, also of Lee’s own design. Lynch’s image, which deals with the perception of photography as reality, will be cut on the College of Design’s CNC (computer numerical controlled) router and later installed in the Design on Main Gallery in downtown Ames.

McFarlane’s landscape design will become part of a sculptural installation. And Miller’s image will depict what he perceives as a hog-processing plant’s overwhelming power in his hometown.

A team of three beginning-level relief printmaking students — integrated studio arts seniors Katrina Bowers, Jesup, and Emily Padget, Waterloo, and junior Damon Jarecki, Ames — is developing a print block based on Bernini’s Fountain of the Four Rivers in Rome. Padget has designed the central element, which references the seven continents. Jarecki is creating a collaged cityscape that references well-known buildings from cultures across the planet. And Bowers’ treatment of the sky will include multicultural interpretations of the constellations.

For the first time, Katz and JoAnn Boehmer, retired ISU senior lecturer in integrated studio arts — members of the collaborative group BOKA — have also designed a block cut on the CNC router. The image includes symbols of faith, family and food interspersed with roots to convey the forces that shape our human identity.

Eight Augustana College students will be printing three different designs. “Cloud Hopper” will evoke an out-of-body flying experience. “The Needle has Landed” plays with cryptic references to the Seattle Space Needle. “El Rio Se Alimenta” is a meditation on riverways in the Andes.

The Iowa State students’ large-scale prints will be displayed Oct. 23-Nov. 3 in the College of Design’s atrium, the Lyle E. Lightfoot Forum. The exhibition is free and open to the public.

The public is invited to watch the printing process. 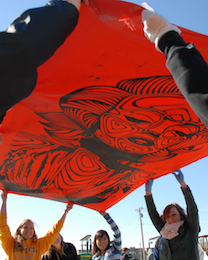