AMES, Iowa — An Iowa State University undergraduate student has achieved the “holy grail of 3-D graphics” with her winning entry in a competition to design a three-dimensional tree for use in rendering landscape plans.

Although excited about winning the 3-D printer, Davids will donate it to her hometown high school — Knoxville High School, she said.

The contest asked entrants to create a tree in SketchUp “that looks realistic and natural, yet has a small file size and processing impact”—specifically, a file size under 250 kilobytes, using no more than three or four materials, with between 50 and 500 faces and an edge count between 1,500 and 5,000. (Edges and faces are the basic building blocks of SketchUp, a three-dimensional modeling and visualization application.) 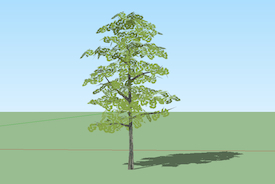 Davids' Gingko tree model was based on a tree near campus.

Entries were evaluated on these basic requirements as well as realistic appearance of the model from a bird’s-eye perspective, realistic transparency through the tree when placed in massings and in front of buildings in a landscape plan, realistic shadow without taxing the software’s processing capability, and the user’s ability to orbit freely around the model.

“The file size was 104kb, which makes it easy for users to download on demand; it has a nice asymmetry and most importantly, is done with a minimum of overhead in SketchUp—barely 2,000 edges and under 500 faces,” he said.

“The leaf structures are very cleanly constructed and convey a great sense of foliage as well. Consider the tens of thousands of leaves on an actual tree of this size, the millions of edges and faces, and you start to realize the incredible effort in simplifying that down to something that looks fantastic, yet still allows a user to move about in the SketchUp model.”

Davids, who has only been using SketchUp since last spring semester, entered the contest to improve her skills in the program, she said. The ginkgo tree she created for the competition was modeled after one on Lincoln Way near the Iowa State campus.

“It took me around 15 hours to make the tree. I had never done something like this in SketchUp before, so I had to learn as I went,” Davids said. “On my first try I ended up way over the maximum allowed edges and faces for the model, so I started over and had to edit quite a bit out and simplify.”

The ISU landscape architecture program, part of the College of Design, uses a CNC (computer numerical controlled) router for most of its projects, and the college’s output center has a 3-D printer for student use. 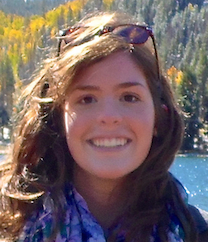 Iowa State University landscape architecture junior Sara Davids has achieved the “holy grail of 3-D graphics” with her winning entry in a competition to design a three-dimensional tree for use in rendering landscape plans. She won the 2013 Student 3-D Design Contest sponsored by Land F/X. She won a new FlashForge 3D printer that she'll  donate to her hometown high school.

“Ms. Davids’ Ginkgo model exceeded all of our design criteria and looks great.”