No joke: ISU students learning the tricks of standup comedy 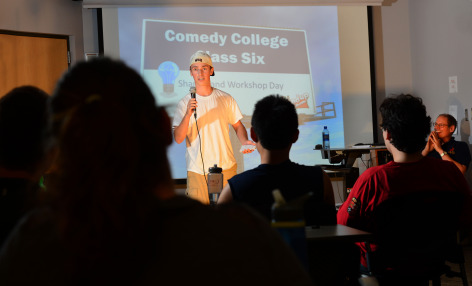 Eric Lacey practices his standup material during a recent class. To get the feel of being on stage students practice with a microphone and under the bright lights. Photo by Bob Elbert (Larger photo)

AMES, Iowa – There is a science to crafting a good bit and delivering a one-liner that sets off a roar of laughter from the audience. And like any skill, Peter Orazem and Gavin Jerome believe it’s one students in their Comedy College course at Iowa State University can learn – no joke, they can learn to be funny.

“I get the question all the time, ‘Can you teach someone to be funny? Either you’re funny or you’re not, right?’ No, comedy is like any other skill, like welding, carpentry or brain surgery. There are tricks, techniques and formulas that if you study them, you will be funnier,” said Jerome, a professional entertainer who has partnered with Orazem to teach the Honors seminar.

Orazem, a University Professor of economics at Iowa State University, is living proof. He continues to master the skill he first developed as a student in one of Jerome’s comedy workshops. And he admits his routine has come a long way since learning some of the tricks and techniques of comedy.

“I remember the first time, as an academic, my first joke was close to two pages and had footnotes. I learned there’s a difference between a dissertation and a one-liner,” Orazem said.

Orazem now gets regular requests to perform at charitable fundraisers and host campus events, like the farewell for former ISU President Gregory Geoffroy. And he uses humor in the classroom, adding punch lines to lectures on microeconomics – a topic few find funny – but Orazem can get a laugh. Jerome said his former student is a great example of how comedy is a tool anyone can use.

“Humor is such a universal language; it has practical applications for any student, no matter what field they’re going into,” Jerome said. “In each one of our lessons we try to add some serious, practical things. So the lesson may be fun, but we show how comedy relates to the workplace.”

Humor may be a universal language, but a good comedian understands some topics are off limits. It all depends on the audience and setting. There is a difference between a corporate comedy routine and a late-night comedy roast, Orazem said, and that is an important lesson for students to learn.

“It turns out that when you’re going to be emcee for the president of the university, there are some things that you’re not allowed to say,” Orazem said. “The very best comedy is not the filthy crap. You can be absolutely hilarious without shocking people; you just have to be smart.”

With comedy, it’s not just what you say, but how you say it. Something Lisa Hansen, a sophomore in diet and exercise, said she learned after the first class.

“I’m very sarcastic and sometimes that doesn’t quite resonate with others,” Hansen said. “What I think is funny may not be funny to others, so I’m learning how to gauge the group and gauge the audience.”

Throughout the semester, students will not only learn how to write and tell jokes, but Jerome and Orazem want to improve their sense of humor while sharing some of the tricks of the trade. Many of those tricks have been borrowed or passed down from some of the best comedians. Timing and delivery are important, but it all starts with writing good material.

Students sometimes can't help but crack up while practicing their material in class. Photo by Bob Elbert (Larger photo)

“You start with a lot of material and several pages that you may whittle down to four lines, but you need to get efficiently to the funny part,” Orazem said. “There’s nothing scarier than writing jokes and not knowing how it’s going to work. But you have to put the material in front of an audience to figure out if it’s as good as you think it is.”

Orazem and Jerome know just how terrifying and exhilarating it is to test that material on stage for the first time, and they want students to have that experience. So for the class final, students will perform their stand-up routine at the M-Shop in the ISU Memorial Union on Dec. 3-4.

“It’s like jumping out of a plane; I suggest everybody do it once. Getting that experience of doing a little standup and getting that first laugh, it’s a feeling unlike anything else,” Jerome said.

The idea is somewhat frightening for Eric Lacey, a sophomore in mechanical engineering, who admits to blushing anytime he gets in front of a crowd. But he took the class to build his public speaking skills and the final will be a test of his confidence.

“It might be terrifying while I’m up there, but it’s going to be worth it in the end,” Lacey said. “I figure if you can get up in front of a crowd and make them laugh, you can do pretty much anything related to speaking or giving a presentation in front of a group.”

And that’s the whole point of Comedy College. More than just making people laugh, Jerome and Orazem want students to learn that humor is a useful tool in any career and to be comfortable interacting with a large group of people.

“You do learn something about how to deal with new situations with a little bit of confidence,” Orazem said. “I think if you can stand on stage and deliver your own material, even though you can feel the sweat dripping down your back, if you can do that, you can do anything.”

Peter Orazem and Gavin Jerome believe comedy is just like any other skill you can learn. That's why the two are teaching a Comedy College course to help Iowa State students learn the tricks and techniques of standup comedy. Students may never step foot on stage after this course, but Orazem and Jerome know it's a skill students will use throughout their career.

“Humor is such a universal language; it has practical applications for any student, no matter what field they’re going into. In each one of our lessons we try to add some serious, practical things. So the lesson may be fun, but we show how comedy relates to the workplace.” 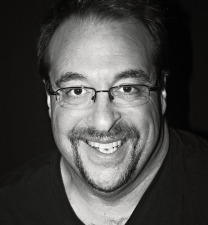