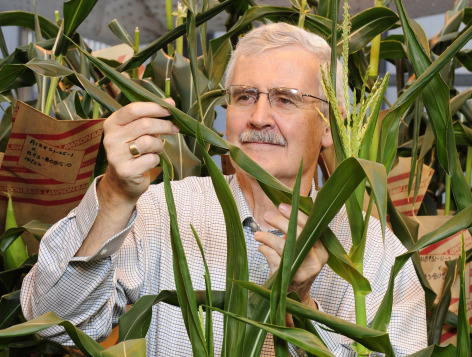 Stephen Howell is part of a team of researchers studying how plants respond to environmental stress. Photo courtesy of Stephen Howell. Larger image

AMES, Iowa –Research at Iowa State University has shed new light on the genetic mechanisms that allow plants to protect themselves from environmental stress.

The research, published recently in the Proceedings of the National Academy of Sciences, could lead to improved traits in cash crops that would allow them to withstand adverse environmental conditions, particularly heat stress.

“Given the concerns over climate change and some of the extreme shifts in weather we’ve seen in recent years, one of the most valued traits in crops is stress tolerance,” said Stephen Howell, a professor of genetics, development and cell biology and senior author of the study. “It’s a very timely issue.”

The research takes a close look at what happens to the model plant Arabidopsis at a molecular level when faced with environmental stress. It involves a process called unfolded protein response, which can act as an alarm system when the plant senses harsh conditions. When the alarm goes off, the plant activates survival measures that can protect crops from succumbing to weather extremes.

Howell’s lab discovered one arm of the signaling system that activates the response in 2007 and a second arm in 2011. In the latest paper, the researchers first shut down and then restored both arms of the signaling pathway, demonstrating its importance in stress protection and normal plant growth.

The signaling pathway that allows for the response features several redundancies that made the system difficult to study at first, said Renu Srivastava, an assistant scientist in the ISU Plant Sciences Institute and a co-author of the study. Shut down only part of the system, and stress signaling takes an alternate path, Srivastava said. But blocking each component in the pathway revealed its full importance to plants, she said.

“Not only does it impact how a plant responds to environmental stress, but it’s also important for reproduction and development,” Srivastava said. “It’s a hugely influential system.”

Arabidopsis, a small flowering plant, was chosen for the study because it has a short life cycle and its whole genome has been sequenced, making it a good model for experimentation, said Yan Deng, a postdoctoral researcher in the Plant Sciences Institute and first author of the study.

But the results of the research will have major implications for our understanding of stress response in cash crops such as corn, soybeans and rice, Deng said.

Howell said that identifying the genes that bolster a robust response to stress may pave the way for the development of crop varieties that can stand up to weather extremes – conditions Iowa farmers have encountered all too often in recent years. Such sources of environmental stress are among the most common factors that lead to reduced yields, he said.

“This sort of research can help us to reprogram the genes that govern stress response and ultimately protect the plants from stress damage,” he said.

Research at Iowa State University has shed new light on the genetic mechanisms that allow plants to protect themselves from environmental stress, which could lead to improved stress tolerance in cash crops.

“Given the concerns over climate change and some of the extreme shifts in weather we’ve seen in recent years, one of the most valued traits in crops is stress tolerance. It’s a very timely issue.”