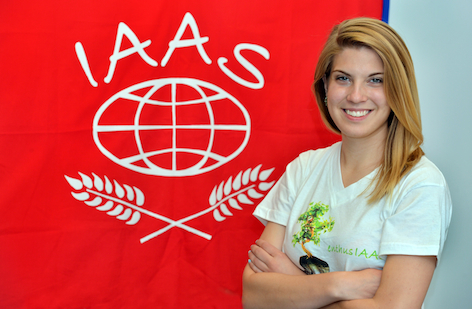 AMES, Iowa -- Genna Tesdall flew on an airplane for the first time in her life in 2012. Now she's president of an international association of 100,000 students who study agriculture and related sciences in 40 countries around the globe.

Tesdall is a junior from Ames majoring in global resource systems and agricultural biology. She was elected last August to lead the International Association of students in Agricultural and related Sciences (IAAS).

Founded in 1957 and based in Leuven, Belgium, IAAS focuses on exchanging and sharing knowledge through conferences, topical seminar weeks, exchange programs and managing a database of internship opportunities. And they gather for a World Congress each summer. Thanks to the ISU chapter's efforts led by Tesdall and fellow club member Rebecca Clay, second-year agronomy, the 2014 assembly will be at Iowa State, July 13-Aug. 3.

Tesdall was elected to the global leadership role within a year of her first plane flight to an IAAS meeting in Uppsala, Sweden.

"My fellow IAASers taught me how to go through the airport," Tesdall said. "I never thought that I'd ever have the money to travel abroad. I saw that as something only very affluent people ever did."

Now she's hooked. Tesdall found community and purpose in her work with IAAS.

"When you spend a week together for a seminar or three weeks for the World Congress, you really get to know the other members well," she said. "And we're all interested in agricultural and environmental problems and successes. So there's always a constant exchange of knowledge. That makes this a really unique family and is why I really bought into IAAS."

Tesdall (who speaks Spanish) attended the IAAS 2013 World Congress in Santiago, Chile, where she was elected president. She also has served as a Plant Sciences Institute undergraduate Borlaug Intern to the International Potato Center in Lima, Peru, and studied abroad in Costa Rica. Now a proverbial jet setter, Tesdall has upcoming trips to IAAS meetings in Belarus and Venezuela.

A graduate of Ames High School, Tesdall believes the international community that ISU attracts to Ames gave her an appreciation of diverse cultures.

"A lot of my friends in high school were second-generation Americans, so I grew up with a broad cultural experience," she said.

Tesdall entered Iowa State as an engineering major, interested in physics and material science. After completing two undergraduate research assistantships and co-authoring a research publication, she decided, "something was missing."

"The more I evaluated what I could do and the difference I could make, I realized that many of the fundamental problems and solutions are in ag and the environment. So I see myself making a difference in that way," Tesdall said.

She immediately "felt at home" with ISU's IAAS chapter and "even more at home" when she traveled abroad to meet with other IAAS members, who share her passion for ag and the environment.

"It was astonishing how much we had in common," she said.

After working on IAAS publications at the world level, Tesdall made a pitch for ISU to host the 2014 World Congress. When she had the blessing of the university, the College of Agriculture and Life Sciences and the ISU chapter, Tesdall and Clay wrote a successful proposal for the bid. And "that's what caught the eye of the IAAS World Executive Committee" who invited her to run for president.

Tesdall advises the two Iowa State students who co-direct the Congress —Clay and Brian Castro, senior in nutritional sciences. She expects between 80 and 100 IAAS members from around the world will attend. In addition to a five-day general assembly (modeled on the United Nations), the ISU chapter will host tours and professional development workshops. They're planning farm and industry tours in Iowa and Kansas, as well as cultural activities.

"We want to show off the breadth of agriculture here -- from confinement operations to organic farms," she said. "The tours aren't set yet because we are looking for corporate sponsors and need to see what our funding is."

Although her position at the helm of an international association is pretty much a full-time job, Tesdall is taking 12 credits this semester. She is a residence hall community adviser in Oak Hall and a summer research assistant at Iowa State's Horticulture Research Station. Yet, Tesdall says her future is "uncertain."

"I've done research and now I am seeing the world of agricultural policy and the inner workings of a non-governmental organization. So I'll see if I like it and what my aptitude is for it," she said.

"IAAS has really helped me come into my own. It's helped give me a sense of what I can do in the world and what I want to do in the world," she said. "We'll see where the opportunities lead me."

Genna Tesdall flew on an airplane for the first time in her life in 2012. Now she's president of an international association of 100,000 students who study agriculture and related sciences in 40 countries around the globe. Tesdall is a junior from Ames majoring in global resource systems and agricultural biology. She was elected last August to lead the International Association of students in Agricultural and related Sciences (IAAS), and she's bringing their World Congress to Ames next summer.