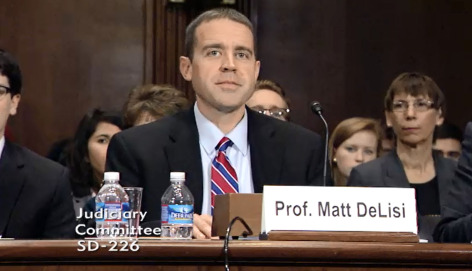 AMES, Iowa – Matt DeLisi says it would be a mistake to change federal sentencing guidelines in an effort to reduce prison overcrowding. DeLisi, a professor of sociology at Iowa State University, testified before the U.S. Senate Judiciary Committee on Nov. 6 that cutting prison sentences would put more offenders back on the streets and increase the crime rate.

DeLisi, who also coordinates the criminal justice studies program at Iowa State, was part of a panel invited by the committee to comment on proposed policy changes detailed in a report from the Urban Institute. The changes are intended to lower costs and growth in the federal prison system.

Giving judges more discretion on mandatory minimum sentences and lowering the minimum amount of time offenders must serve are among the recommendations outlined in the report. DeLisi says the policies are well-intentioned, but idealistic.

“Many people are just ideologically unwilling to acknowledge that there are serious offenders, and there comes a point where you’re just going to have to keep them in confinement forever,” DeLisi said. “They act as if the costs that are associated with prison are really the important issue and that we should just reduce those costs, at all costs. They lose sight of who these offenders really are.”

In his written testimony, DeLisi used the example of an 85-year-old sex offender who allegedly assaulted a 95-year-old woman in an Iowa nursing home where they both lived. The offender has a history of sex crimes against children. The case illustrates that offenders still pose a risk at any age, DeLisi said.

“The correctional system or a policymaker might have previously looked at this offender and said, ‘Well, he’s 85, he can’t be a risk to anyone.’ But in fact, the guy is sexually sadistic and that just doesn’t go away,” DeLisi said. “He’s less threatening than he was at 40 or 20, but he’s still a psychopathic, sexually sadistic person.”

Reoffending, often more than one crime

To give the committee some perspective on the societal costs, DeLisi cited a study that analyzed nearly two decades of prisoner data and determined that one offender is likely to commit 17 new crimes upon release. Using that data, DeLisi says reducing the current federal prison population by just one percent would result in more than 37,000 new murders, rapes, burglaries or other crimes.

“I don’t want the committee to think we’re just releasing a bunch of choir boys,” DeLisi said. “They’re bad people and that’s why they’re in prison.”

DeLisi’s own research has focused on antisocial behavior and the likelihood that offenders with an extensive criminal history will commit another crime. That is why he feels it is a bad idea to waive mandatory minimum sentencing requirements for all offenders, as recommended by the report. Judges already have discretion in drug cases if the offender has a minor or no criminal history. However, DeLisi says that does not mean recidivism rates are lower among drug offenders.

“There’s a notion that drug offenders are just using drugs and are victimless offenders,” DeLisi said. “In reality, drug offenders are the worst because they do a little bit of everything, they engage in violent behavior, property offenses and they do it at very high rates in part because of their addiction.”

There are other factors the committee should consider, such as gang affiliation, cost to society and the rights of victims, DeLisi said. Gang membership is a strong indicator of recidivism. DeLisi’s research shows that the cost of one career criminal – in terms of victimization, lost productivity and justice system costs – is estimated to be more than $1 million. And reducing mandatory minimum sentences sends a message to victims that cutting costs is more important than having offenders pay for their crime.

Watch DeLisi’s testimony (starts at approx. 1:29:30) before the Senate Judiciary Committee and read his written testimony.

Matt DeLisi says it would be a mistake to change federal sentencing guidelines in an effort to reduce prison overcrowding. DeLisi, a professor of sociology at Iowa State University, testified before the U.S. Senate Judiciary Committee on Nov. 6 that cutting prison sentences would put more offenders back on the streets and increase the crime rate.