Watch as Steve Butler teaches his students the mathematics of juggling. Video by Alex Murphy

AMES, Iowa – Steve Butler casually tosses a ball from his left hand to his right to demonstrate his point that anyone can juggle. With just one ball it’s easy, until he changes it up and adds a second and a third ball to the mix. Still, the assistant professor of mathematics at Iowa State University says the secret to juggling is simple – it’s all about patterns.

“Anyone can juggle,” Butler said. “There are certain juggling patterns that everyone has mastered, they just don’t realize it. They are so simple that people overlook them as juggling, but they are the basic building blocks to form more interesting patterns.”

Those patterns provide the foundation for Butler’s class this fall about the mathematics of juggling. The two topics have a lot in common because mathematics is the science of studying patterns and juggling is the art of controlling patterns, Butler said. The purpose of the class is to help students understand the different patterns involved in juggling using math.

“There are different kinds of throws and different throws have numbers attached to them. The idea is you want to keep track of how far the object has travelled or how long it’s in the air before you have to catch it again. So a ‘one’ throw is very quick and a ‘two’ throw is essentially twice as long,” Butler said. 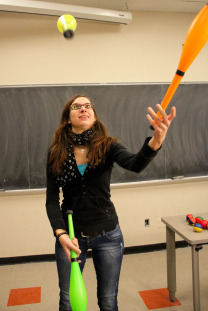 Students learn how to juggle a variety of objects. The shape and size often determines how many they can juggle at one time. Photo by Alex Murphy (Larger image)

Applying math to the sport allows jugglers to explore the limits of what is possible, calculate the number of different patterns and find connections between patterns. Butler says students can use a formula to figure out, for example, all the juggling patterns using four balls that repeat after five throws. In case you’re wondering – there are 2,101 such patterns.

Most juggling tricks involve some variation of the three-ball cascade, Butler explained. It is a fairly basic pattern, in which the juggler throws three balls to the same height on a consistent beat. Other patterns or sequences, such as the 4-4-1, are not necessarily more complex but require different coordination, he said. The 4-4-1 is a pattern that Butler only recently learned. One that didn’t exist until mathematicians entered the equation.

“That’s the kind of pattern that people weren’t sure was possible, but mathematically we said, ‘Yes, you can do that.’ That’s just one of an infinite variety of patterns,” Butler said. “Mathematicians came in and decided to study this and came up with a systematic approach of assigning numbers to juggling to understand what’s possible and what’s not possible.”

The rules and limits of juggling

Butler started juggling when he was 10 years old. He credits Ron Graham, a well-respected mathematician at the University of California -San Diego and former president of the International Juggler’s Association, for helping develop his skill and teaching him how to juggle four balls. Regardless of skill or level, Butler says there is a basic rule that all jugglers must follow.

“You only want to have to deal with one ball at a time. If you have two balls coming to your hand at one time you’re in trouble; that’s dangerous,” Butler said.

Butler spends much of class working with students on math concepts and problems, but they also get time to practice their juggling skills. Photo by Alex Murphy (Larger image)

Juggling has continued to evolve because of mathematics and online programs that demonstrate the endless sequences. But despite the countless possibilities, jugglers are limited by the fact they can only keep so many objects in the air at one time. A fact that, Butler says, makes juggling impossible to completely master because jugglers are always trying to add one more ball or one more ring.

Most students in Butler’s class have some experience juggling. His hope is that they will be able to juggle three balls by the end of the semester, but ultimately it’s about the math. By exploring the properties of juggling sequences, students are learning skills they can apply to other areas of mathematics.

“Being able to juggle is nice, but what’s really important about this class, are the mathematical tools,” Butler said. “The point in attacking the problem and trying to understand the problem, is we get better tools, and those tools in turn we can take and apply to other problems. That’s really what’s important in mathematics is developing a good set of tools.”

“Anyone can juggle. There are certain juggling patterns that everyone has mastered, they just don’t realize it. They are so simple that people overlook them as juggling, but they are the basic building blocks to form more interesting patterns.” 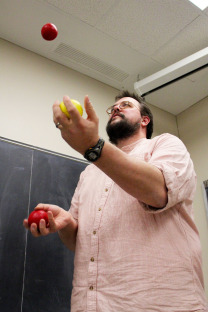 Steve Butler hopes students will learn how to juggle three balls by the end of the semester. Photo by Alex Murphy (Larger photo)