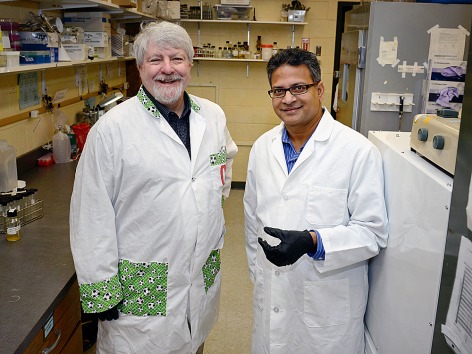 Iowa State's Michael Wannemuehler and Balaji Narasimhan, left to right in a lab at the College of Veterinary Medicine, are working to develop nanovaccines. Narasimhan is holding a small vial of a nanovaccine formulation for pneumonia. Larger photo. Photo by Amy Vinchattle.

“This is scary,” he said. “The diseases we have vaccines for today are the low-hanging fruit. And so people get sick. But we can’t just keep treating these new and re-emerging diseases. That’s too expensive. We have to prevent them.”

Narasimhan thinks nanovaccines are the best arsenal for that fight. Nanovaccines, unlike current vaccines, are based on tiny particles that can send pathogen-like signals to immune cells. They can prevent disease. They can boost the immune system’s own response to disease. Production is quick. Storage is easy. And the technology is sustainable.

“This is truly one of the dream teams working on vaccine research anywhere in the world,” Narasimhan said.

The nanovaccine team and three others won the initiative’s major, pursuit-funding awards and another three teams won one-year, $100,000 proof-of-concept awards.

“These proposals are just what we wanted to see,” Leath said when he announced the awards last June. “They pull together talented researchers from our university, other institutions, national labs and industry to tackle some of the grand challenges facing our world.”

Narasimhan has used the award to recruit a team of 43 researchers from universities, companies, research institutes, national labs and a research hospital. The team includes 21 researchers from Iowa State in addition to researchers from the University of Iowa and three Ames-based entities, the National Animal Disease Center, NewLink Genetics Corp. and PK Biosciences Corp.

The project’s five research thrusts and their leaders are:

Looking at the whole system

The team will take a “systems” approach to its research and development, Narasimhan said. That means engineers, doctors, biologists, chemists, materials scientists, industry researchers and social scientists will work together throughout the development of nanovaccines.

“When designing a vaccine, we need to think about where it will be deployed, who will use it and how much it will cost right from the onset,” he said. “Right now, that doesn’t happen.”

Narasimhan has worked more than a decade to develop nanotechnology for medical applications. Working with Wannemuehler of Iowa State’s College of Veterinary Medicine, Narasimhan and the staff and students in his lab are producing biodegradable polymer nanoparticles that mimic the size and chemistry of pathogens to trigger appropriate immune responses in the body.

Nanoparticles can also be loaded with medicines and used to slowly deliver drugs to fight off diseases, including brain ailments, lung problems and even cancer.

Narasimhan said the nanovaccine research team already has some successes to report:

The University of Nebraska Medical Center has won an $11 million grant from the National Institutes of Health to study nanomedicines, including a nanovaccine for cancer. And, the Bill & Melinda Gates Foundation awarded Iowa State researchers a $100,000 grant to study single-dose therapies for malaria and filarial diseases such as elephantiasis and river blindness. Success with the initial Gates grant would allow the researchers to apply for an additional grant of up to $1 million.

Narasimhan said the timing is right to win more support for the research team’s new approach to developing nanovaccines: Illnesses such as whooping cough are making a comeback. Bacteria are growing resistant to antibiotics. There are undesirable side effects to some common medicines. And some treatments are too expensive for the developing world.

There are many reasons Iowa State's Balaji Narasimhan thinks nanovaccines can revolutionize the prevention and treatment of diseases: They can boost the immune system's own response to disease. Production is quick. Storage is easy. And the technology is sustainable. All that has Narasimhan using a grant from Iowa State's Presidential Initiative for Interdisciplinary Research to assemble a "dream team" to research and develop nanovaccines.

"Nanovaccine Initiative" by the College of Engineering

“This is truly one of the dream teams working on vaccine research anywhere in the world.”