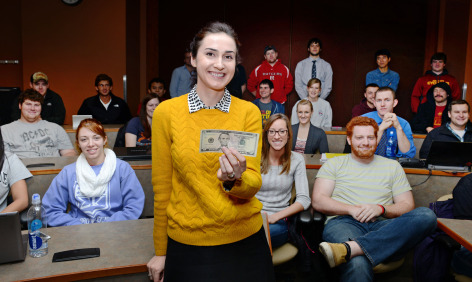 AMES, Iowa – The rules of the challenge were simple. Students had four weeks to develop a concept to make as much money as possible and avoid bankruptcy. But there was a catch; each team had only a $5 initial investment to get started.

Not only did Andreea Kiss, an assistant professor of management at Iowa State University, get a return on the $5 investment she made in each team, several local charities benefited from the thousands of dollars raised through the challenge. Nearly $14,000 was donated to veterans’ organizations, food banks, shelters for homeless youth and other groups.

Kiss adapted the $5 challenge for her business management course as a way to get students out of their comfort zone. Instead of creating a scenario-based simulation to work on in class, she wanted students to gain actual hands-on experience as entrepreneurs.

Students learn the value of networking

Students admit they faced plenty of uncertainty about where to go and how to ask for funding. The teams with the greatest success sought out other investors and partners to support their project. Mike Smith, a senior in management and member of the Iowa National Guard and ISU Army ROTC, was part of a team that organized a 5k run to benefit the Story County Freedom Flight.

“We were able to network and reach out to past employers or current employers and also a few family members that helped get our project up and going,” Smith said. “It was awesome to see businesses in the community rally around one goal and help work toward a greater cause.”

Smith and his teammates, Emily Saito, Janae Harlow, Jordan Davidson and Blake McOllough, not only won the class challenge, but gained a greater appreciation for corporate responsibility. Saito says the team quickly realized the project was about more than getting an ‘A’ on an assignment.

“Our goal was to show our support and give back to Story County veterans who have given so much for us,” said Saito, a senior in family and consumer science education and a combat medic in the Army Reserve.

“After running that 5K race along with the other 75 participants, the greatest lesson I have learned is that anyone can make a difference in their community and support a cause that they believe in; it just takes dedication and teamwork,” she added.

The team raised more than $1,600 from the run. It costs around $650 to send one Story County veteran on the Freedom Flight to Washington, D.C., to visit all the war memorials.

Students find value in a cause

Kiss says most groups chose social causes to create value for their venture. Students found investors and customers were more willing to support their effort if it benefited a charitable organization. Here’s an overview of other successful student projects:

Iowa Homeless Youth Centers: The team joined other college and high school students to build a giant Lego man entirely out of cardboard for Reggie’s Sleepout in Des Moines. The event raises money and awareness for homeless youth in Iowa. Working as part of a larger student initiative, the group helped raise $7,500.

Pappajohn Center for Entrepreneurship at Iowa State: Students opted not to use the $5 investment to make or purchase a product to sell. Instead, students approached local business owners and offered to advertise the business’s product or service during the team’s class presentation. The group contacted 11 area businesses, created nine advertisements and raised $395. The money will benefit other student entrepreneurs who win business competitions sponsored by the Pappajohn Center.

Recycling initiative: This for-profit business venture was built around a social cause. Students distributed trash bags to area residents to fill with cans redeemable for a 5 cent deposit. The bags were collected on a weekly basis. As an incentive, students paid customers $2 for a full trash bag. They made $3 for every bag delivered to the recycling center for a total profit of $45.

While not every project was a home run, Kiss says students still learned valuable lessons about researching a target audience and product development as well as the challenges of making a pitch to a potential customer or investor.

“I think one of the first lessons they learn is that selling something is relatively difficult. It takes a certain art to describe your product in a positive light and emphasize the benefits that the customer might gain from purchasing the product,” Kiss said. “Students learn to explain their idea, why they’re qualified to execute it, how much money they need and what can the investor gain by investing in you.”

Andreea Kiss gave her students $5 and four weeks to launch a business venture and raise as much money as possible. The students accepted the challenge and raised thousands for local charities.