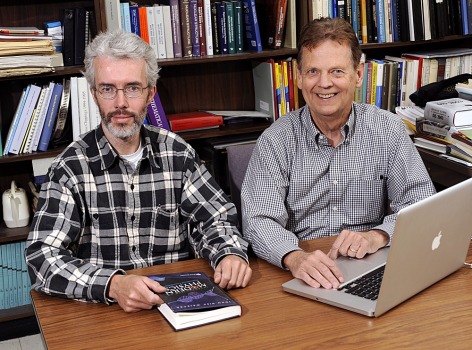 Iowa State's Pieter Maris and James Vary, left to right, study the structures and reactions of nuclei. Their findings can be vital for the development of nuclear energy. Larger photo. Photo by Bob Elbert.

AMES, Iowa – A team led by an Iowa State University nuclear physicist has won a grant of 204 million hours on two of the country’s fastest supercomputers to study the structure and reactions of rare and exotic nuclei.

The grant allocates 104 million hours on the Titan supercomputer (a Cray XK7 hybrid system) at the Oak Ridge Leadership Computing Facility in Tennessee and 100 million hours on the Mira supercomputer (an IBM Blue Gene/Q system) at the Argonne Leadership Computing Facility in Illinois. The machines operate at the petascale and are capable of more than a quadrillion calculations per second.

The research team’s computing time on the two computers is for the first year of a grant that can be renewed for two additional years.

The supercomputing time is one of 59 grants recently awarded by the U.S. Department of Energy’s Office of Science. The grants are part of the department’s Innovative and Novel Computational Impact on Theory and Experiment program, or INCITE. The program awarded a total of nearly 6 billion supercomputing hours.

The Department of Energy does not release the monetary value of the supercomputer time.

“There are a lot of big puzzles out there that we’d like to solve,” said James Vary, an Iowa State professor of physics and astronomy and the leader of the nine-member research team that will use all that computing power. “In our case, we use nuclei as labs to understand the fundamental laws of nature.”

That understanding can have major implications for our energy future.

“Predictions for the structure and reactions of nuclei, with assessed uncertainties, are important for the future of the nation’s energy and security needs,” the researchers wrote in a summary of their project. “Such calculations are relevant to many applications in nuclear energy, nuclear security and nuclear astrophysics.”

Vary said the team’s findings will be vital for the development of nuclear energy, including advanced nuclear fission reactors and fusion energy.

The project will focus on rare isotopes, nuclei of elements that feature additional or fewer neutrons, Vary said. Oxygen, for example, has at least 17 known isotopes.

The structure and reactions of many isotopes can’t be studied in a laboratory because of their short lifetimes. And so computing power is necessary to produce accurate simulations that can predict the nuclear structures, properties and reactions of the isotopes.

These aren’t easy problems: “That’s why we need 50-60 Ph.D.-level physicists working days and nights and holidays,” Vary said. “And we need supercomputers, too.”

Iowa State University's James Vary is leading a team of physicists in a study of the structure and reactions of rare and exotic nuclei. The team recently won a grant of 204 million supercomputing hours from the U.S. Department of Energy's Office of Science. The team's findings could have applications in nuclear energy, nuclear security and nuclear astrophysics.

“There are a lot of big puzzles out there that we’d like to solve. In our case, we use nuclei as labs to understand the fundamental laws of nature.”

James Vary, an Iowa State professor of physics and astronomy in the College of Liberal Arts and Sciences