Reindeer-like sculpture has landed at the ISU College of Design 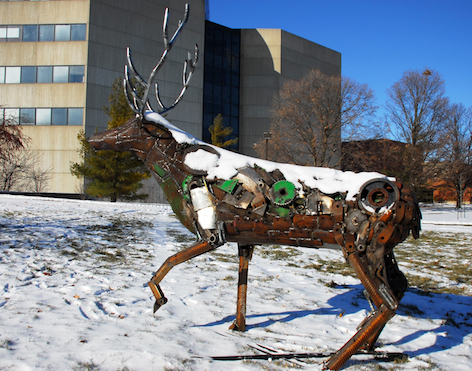 AMES, Iowa — There are no jingle bells or red nose, but passersby have been doing a double take when they catch sight of a solo red deer stag on the east lawn of the Iowa State University College of Design.

They soon discover that the stag is inanimate, a larger-than-life sculpture made of scrap steel from agricultural implements. Titled “Metempsychosis” (the transmigration of the soul from one body to another after death), the sculpture is an independent-study project by Nathan Daniel, an ISU senior majoring in design.

The Lohrville native began his project two weeks into fall semester under the guidance of James Spiller, lecturer in architecture and design. He obtained permission from a John Deere dealer to sort through its salvage dumpster for parts that were going to be recycled, and he collected broken and discarded items from his family’s and neighboring farms to use for his project.

“A lot of farmers fix equipment in the fall during harvest and just pile up the broken parts until they have time to take them to the scrap yard in the spring,” Daniel said. “I went around and asked people if I could take the junk they didn’t want.”

Daniel went home most weekends this fall to work on the sculpture in his family’s heated shop. Initially he planned to create a wolf, but over Thanksgiving break, he began to think the body would work better as a deer.

“I had some antlers in the shop and put them on the sculpture as I was building it and thought they looked pretty good,” Daniel said. “That’s when I changed direction.”

Daniel finished the piece Dec. 8 and a crew from the university’s facilities planning and management department helped install it with a skid loader Dec. 10.

The completed sculpture is about eight-and-a-half feet long and ranges from 18 to 24 inches wide. From the ground to the top of its head is five-feet-eight-inches, with the antlers adding another two feet, nine inches. It weighs an estimated 700 pounds.

For Daniel, the sculpture represents reincarnation, “taking these dead, unwanted, broken parts and giving them new life as an animal.” He looked up synonyms for reincarnation online and chose “metempsychosis” for the title because “I wanted viewers to decide for themselves what it means.”

The stag will be on display through Dec. 21, when Daniel will graduate with a bachelor of design degree. He plans to work on the family farm through the winter while searching for a job that will be the right fit for his diverse set of interests, he said.

“If I didn’t gow up on a farm and have these resources at my fingertips, I wouldn’t have been able to do this project,” he said. “I like to be inspired by something and work hard and learn how to do it well. I’m grateful I had this opportunity.”

A larger-than-life sculpture of a red deer stag made of scrap steel from agricultural implements sits proudly on the front lawn of the College of Design until Dec. 21. The sculpture “Metempsychosis” is an independent-study project by Nathan Daniel, an ISU senior majoring in design. 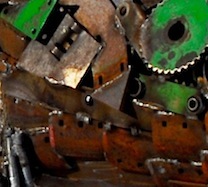 “I like to be inspired by something and work hard and learn how to do it well. I’m grateful I had this opportunity.”