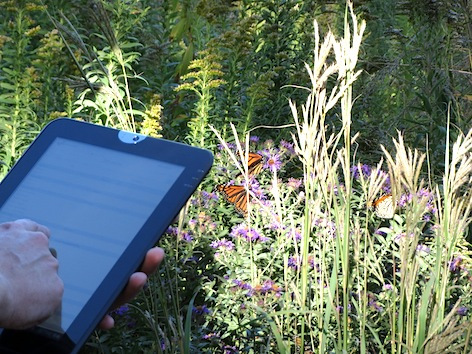 AMES, Iowa  -- An app designed by Iowa State University computer engineering students is catching the attention of butterfly researchers and monitors from Ames to Europe.

The Unified Butterfly Recorder (UBR) is a fully functional app for Android phones and tablets available on Google Play store. The app offers the world's butterfly enthusiasts a standardized and easy-to-use tool for recording data about butterfly population sightings.

He had worked with ISU computer engineering students on three previous senior design projects, including Reiman Gardens' educational games about insects, "Build an Insect" and "Collect and Identify." So, he submitted a proposal for development of the app to Electrical and Computer Engineering Professor Diane Rover and her students — Ryan Scheel, Julie Tillman, Curtis Ullerich and Cameron Whipple. During the yearlong senior design project, they worked closely with Brockman to create the app for their client Reiman Gardens.

"I'm not exaggerating when I say that this design team could rival software development teams in industry,” Rover said. “The students worked like professionals from day one.

“They were ambitious in their project goal to develop a fully functional app for the client that would be used by professionals and volunteers, locally, nationally and internationally,” she added.

Ullerich, who just graduated and is headed to a software engineering job with Google, said the team wanted to work on the butterfly app project because it "is a project with real-world impact" that would be "deployed, used and provide some good in the world."

Last spring, the students sent a questionnaire to several butterfly professionals to get input on the app’s features. After determining which features would be feasible and useable, they worked on the design and developed a prototype. During the summer, Brockman and several colleagues field tested the prototype and provided feedback.

"It's a fairly complex app and it was a very detailed process to develop it," Ullerich said. "We used every sensor the electronic devices have (such as GPS and environmental sensors), and dealt with complex lifecycle issues in terms of the application itself. And we needed to make it very useable for people who aren't necessarily tech savvy." 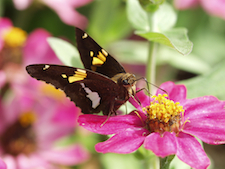 The app includes all 800 butterfly species in the United States and a separate list of all European species. Users can create their own lists of favorites (for example, the approximately 118 species found in Iowa or the 20 to 30 species found at Reiman Gardens).

The app is "extremely powerful," Brockman said. It automatically collects weather, location and timestamps of sightings by selecting a butterfly from an editable list of species. Users also can take photos of specimens to include with records and input many other fields.

"And it's really neat because the students built the app so it can be used with any list — dragonflies, pollinators, trees, even rocks. You can change the list or customize it," Brockman said. "I see this as a great tool for researchers and schoolteachers.”

Brockman and his colleagues are pleased with the finished product.

“I had high hopes and the group exceeded it," he said. "I think this will be a huge asset tool for the conservation community.”Brockman and his colleagues are pleased with the finished product.

Brockman has discussed the UBR app with colleagues in the Netherlands and Germany. As he shares it at professional conferences in the coming months, he expects the app will be “distributed worldwide and used in the field so we can see what tweaks still need to be made.”

He has proposed the development of an iOS version for Apple to next year’s computer engineering senior design class. And there is still some additional work to be done.

"We're working on species lists for other areas as well, outside of U.S. and Europe, including Africa and Neotropics," he said. "We will continue to add species to the master list until we have all of the continents with butterflies covered."

The Unified Butterfly Recorder app is available on Google Play store. Look for the icon of a monarch butterfly under “Apps.”

An app designed by Iowa State University computer engineering students is catching the attention of butterfly researchers and monitors from Ames to Europe. The Unified Butterfly Recorder is a fully functional app for Android phones and tablets available on Google Play store. The app offers the world's butterfly enthusiasts a standardized and easy-to-use tool for recording data about butterfly population sightings.<

"I see this as a great tool for researchers and schoolteachers.”