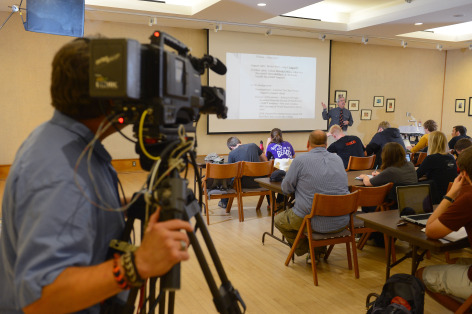 AMES, Iowa – Charles Dobbs outlines several factors that influenced John F. Kennedy’s approach to foreign policy in a lecture that will air on C-SPAN’s American History TV. The segment will air at 7 p.m. and 11 p.m. on Saturday, Feb. 1, and again at noon on Sunday, Feb. 2.

Dobbs, a professor of history, takes students and C-SPAN viewers through a series of historical events that impacted President Kennedy’s decision to intervene in Vietnam.

“Everything from the failure at the Bay of Pigs and in meeting Khrushchev in Vienna, to the Berlin Wall and even the Cuban Missile Crisis may well have caused John F. Kennedy to look to the guerrilla conflict in South Vietnam as a means to demonstrate his toughness and America’s willingness to stand up to international communism,” Dobbs said.

C-SPAN’s American History TV features event coverage, lectures and discussions with teachers and historians every weekend on C-SPAN 3. More information about Dobbs’ lecture can be found at: http://www.c-span.org/History/Events/Lectures-in-History-John-F-Kennedys-Foreign-Policy/10737443651/.

All lectures are also available as a podcast at: c-span.org/historypodcasts