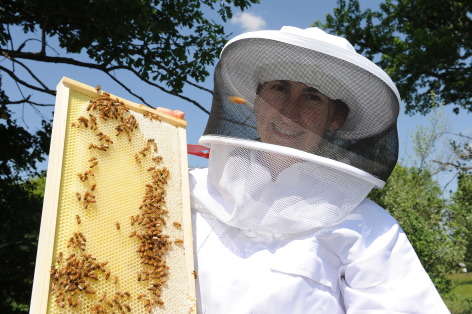 Amy Toth is one of several ISU faculty members working to understand the decline of pollinating insects. Photo by Bob Elbert. Larger image.

AMES, Iowa – Last spring, when Mary Harris started looking for particular pesticides in the pollen carried by honey bees in northwest Iowa, she didn’t find any. But that changed the week tractors hit the fields to plant crops.

That week, every pollen sample she took tested positive for the presence of neonicotinoids, pesticides often used to coat seeds before they’re planted.

Harris, an Iowa State University adjunct assistant professor of natural resource ecology and management, was part of a research team formed by the nonprofit Pollinator Partnership to monitor the level of neonicotinoid pesticides found in plant pollen collected by honey bees. The research, released on Thursday, indicates that the pesticides also contaminate nearby plants that are visited by a range of helpful pollinating insects.

Harris’s effort to study pesticides is one thread in a patchwork of research at Iowa State to identify the factors that have led to steep declines in the populations of pollinating insects in Iowa and across the globe.

ISU faculty members have found several causes that likely lie at the heart of the problem, each one compounding the others.

“People want a single issue to blame it on, and that would be great because we could fix it,” said Amy Toth, an assistant professor of ecology, evolution and organismal biology.  “But it’s not that simple.”

Over the last five years, average annual winter losses among U.S. beekeepers have totaled about 30 percent, said Andrew Joseph, the state apiarist for the Iowa Department of Agriculture. That means that American beekeepers are losing almost a third of their bees each winter. Iowa beekeepers have seen even higher mortality, with average annual losses reaching 54.1 percent during that time period, Joseph said.

It’s a growing crisis that could eventually drive up costs at grocery stores for a range of foods that can’t reach store shelves without the help of pollinators.

Neonics on the wind

Neonicotinoids are a family of pesticides that first gained popularity in the 1990s because of their effectiveness against insects that feed on the sap of plants. In recent years, neonicotinoids – sometimes referred to as neonics – have been commonly used to coat corn seed to fend off pests during the early stages of the corn’s development, Harris said.

But the Pollinator Partnership study provides evidence that those seed treatments may have the unintended consequence of contaminating other plants when the dust that gets kicked up during planting blows from fields into surrounding areas.

“State of the art planters use air pressure and powder lubricants to plant individual seeds,” Harris said. “During planting, some of the treated coating on the seeds rubs off, mixes with the lubricant and is exhausted. It’s a dusty process, and that’s what spreads the pesticide.”

Harris said that the dust settles on nearby trees or flowering plants where it comes into contact with pollinators. The study found that the presence of neonicotinoids in pollen carried by bees spiked the week that planting began and then gradually tapered off during the following weeks.

The study, which was funded by Syngenta and Bayer CropScience, looked at honey bees, a nonnative species that originates in Europe. But Harris noted that about 200 other species of bees that are native to Iowa likely come into contact with neonicotinoids

The study doesn’t prove that neonicotinoids are responsible for the widespread collapse of bee colonies in Corn Belt states, but it does show that pollinating insects are being exposed to pesticides inadvertently, she said.

“We have to consider what sort of impact that exposure could be having on them,” Harris said.

A balanced diet for bees

Toth said unraveling all the causes associated with the decline of pollinating insects is a complex business. Multiple factors have contributed, and each layer of the problem leaves the insects more susceptible to the next, she said.

But a good place to start might be the dwindling variety of diet available to pollinators. Urban sprawl and expanded agricultural production have squeezed out some of the diversity of flowering plants available to insects. Bees thrive when they have access to a wide range of flower pollen, but there are fewer and less varied sources of pollen today than in decades past, Toth said.

The resulting diminished nutrition weakens the insects and heightens their vulnerability to pesticides and viruses, she said.

Toth pointed specifically to viruses carried by parasitic mites, which U.S. researchers have encountered with greater frequency in recent years. When you combine worsening nutrition with limited habitat and an uptick in viruses, the predicament faced by pollinating insects comes into clearer focus.

“It’s the interactions between factors that are compounding the problem,” Toth said. “Bees are less able to withstand the viruses because of their poor nutritional state.”

Pollination is a process by which pollen is transferred from one plant to another, or sometimes within a single plant, thereby allowing fertilization and reproduction. Some plants can carry out the process on their own, but many plants need pollinators – separate organisms that move the pollen – to reproduce.

Many fruits, vegetables and nuts require the help of insects for pollination to occur. Without those insects, farmers and consumers would be put in a serious bind, said Erin Hodgson, an associate professor of entomology at Iowa State.

Hodgson said roughly 30 percent of the food Americans eat depends on pollination, and the reach extends beyond fruits and vegetables. Livestock don’t need pollinators to reproduce, but alfalfa, a plant commonly fed to beef and dairy cattle, does.

“If we keep losing these bees at the rates we currently are, we won’t be able to produce the volume of food Americans are accustomed to eating,” she said. “Ultimately, food will be more expensive.”

Matthew O’Neal, associate professor of entomology, started cataloging the insects that live in Iowa’s corn and soybean fields not long after he came to Iowa State in 2004. In the beginning, he didn’t find many bees. Then O’Neal, the ISU soybean entomologist, switched the kind of traps he was using to more closely mimic flowers. Since then, O’Neal has found more than 40 different species of bees on central Iowa farmland.

He called that a “shocking” array of diversity after his initial efforts seemed to indicate pollinators kept their distance from corn and soybeans.

The bees visit the fields for resources and possibly for nesting habitat, O’Neal said. Although soybeans are bred to be self-pollinating, they produce enough nectar to attract some attention, while bees can be attracted to the pollen shed by corn, he said.

That farmland can host such abundant biodiversity is a hopeful sign that pollinators aren’t disappearing completely.

“The exciting thing is that there were a lot of bees in corn and soybean fields, places we didn’t expect to find them,” he said. “There’s probably more hope than we think there is because we don’t know what’s out there yet. We can certainly do a better job of protecting bees, but even with a landscape dominated by corn and soybeans, bees are out there.”

Researchers at Iowa State University are identifying the factors that have led to steep declines in the populations of pollinating insects such as honey bees in Iowa and across the globe.

“People want a single issue to blame it on, and that would be great because we could fix it. But it’s not that simple.”