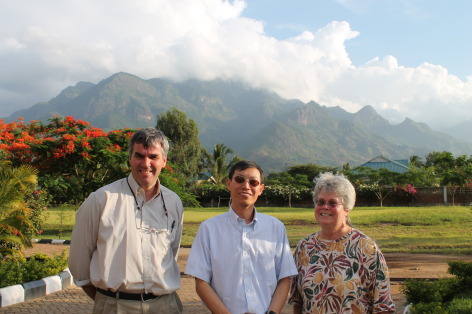 AMES, Iowa – Animal science faculty members at Iowa State University are studying the genetic makeup of chickens in Africa in an effort to improve nutrition and alleviate food scarcity across the continent.

Susan Lamont, a Distinguished Professor of animal science, recently returned from a two-week trip to Africa to lay the groundwork for a project aimed at identifying the genetic mechanisms that strengthen the resistance of chickens to heat and a potentially devastating disease.

The five-year project, funded by a grant from the U.S. Agency for International Development, will draw on the expertise of ISU faculty and will be led by personnel at the University of California, Davis.  Two universities in Africa – Sokoine University in Tanzania and the University of Ghana – also will contribute to the project.

Lamont said the team will explore the local genetic diversity of chickens in Africa and eventually breed birds that are more resistant to heat stress and Newcastle disease, an acute respiratory illness that can kill half the birds in a flock in a matter of days.

“Newcastle disease is the No. 1 health limit to poultry production in these countries,” she said. “The potential impact of this research is huge.”

Addressing Newcastle disease through genetic resistance is of particular importance because most vaccines available to combat the disease require refrigeration, which often is not an option in areas of Africa with limited access to electricity, Lamont said.

One advantage to improving chicken resistance is that the birds require little space compared to other animals, so families can raise their own flocks relatively cheaply. Lamont said between 80 and 90 percent of poultry production in some African countries comes from small backyard flocks rather than the large-scale production that occurs in developed countries. That means a project like this one has the potential to benefit African families in a direct way, she said.

Eggs are an important source of protein, especially for young children, Lamont said. And boosting the stress resistance of chickens means African families can meet their nutritional needs and have more birds left over to sell.

“In most cases, the excess chickens and eggs create extra income,” Lamont said.

While larger animals such as cattle are traditionally the responsibility of men in the countries involved in the study, women usually tend chickens, she said. That means any extra cash will benefit families more directly.

“This work has the potential to address nutritional needs and alleviate poverty while also empowering women,” Lamont said.

Previous work at Iowa State explored the genetics of Fayoumi chickens, a breed originating in Egypt known for resistance to Newcastle disease and other ailments. Lamont said that history with chicken genetics uniquely positioned Iowa State to make important contributions to the project. Jack Dekkers, an ISU Distinguished Professor of animal science, also will work on the project, conducting statistical analyses of genetic information.

Research into the genetics of African chickens by Iowa State University animal science faculty members could improve nutrition, alleviate poverty and empower women across the continent.

“Newcastle disease is the No. 1 health limit to poultry production in these countries. The potential impact of this research is huge.”