AMES, Iowa – U.S. Sen. Claire McCaskill has not shied away from the criticism and double standards that women in political office often face simply because of their gender. During the 2012 election, McCaskill’s opponent criticized her for not being “ladylike” during a debate. This comment – as well as McCaskill’s willingness to take political risks – will be the theme of her upcoming lecture at Iowa State University.

McCaskill, the first woman elected to the Senate from Missouri, is the spring 2014 Mary Louise Smith Chair in Women and Politics at Iowa State. She will present “Women, Leadership and Politics: Taking Risks is ‘Ladylike’” at noon on Friday, March 28, in the Sun Room of the Memorial Union. The lecture is free and open to the public.

Rep. Todd Akin’s suggestion that McCaskill was unladylike only helped her to win re-election in 2012 by more than 15 percentage points – the largest margin for a Missouri Senate candidate in nearly two decades – and earn more votes than any other candidate in the state that year.

Dianne Bystrom, director of the Catt Center for Women and Politics, says the focus of McCaskill’s presentation will be the importance of taking risks.

“With recent studies showing that women are more averse to taking risks – including running for political office – than men, she will bring an important message based on her own personal experiences,” Bystrom said.

McCaskill has spent most of her career in public service at the county, state and federal level since graduating from the University of Missouri College of Law in 1978. She began her career as an assistant prosecutor in Kansas City, Mo., where she specialized in prosecuting arson and sex crimes. That experience is a motivating factor in her fight to change how alleged sexual assaults in the military are prosecuted.

McCaskill was first elected to the U.S. Senate in 2006. At a time when many Americans are frustrated with the political battles in Congress, McCaskill is part of a group of women working to change that perception.

“Sen. McCaskill is among the record 20 women now serving in the U.S. Senate who have received praise from Republicans and Democrats, as well as the media, for their bipartisan efforts to solve some of the major issues before Congress,” said Bystrom. “Although these women do not always agree on the issues, they have demonstrated a willingness to engage in civil discourse and debate.”

A recognized technology leader, with a penchant for communicating directly with constituents via Twitter, McCaskill was named chair of the Commerce Subcommittee on Consumer Protection.  McCaskill also leads a subcommittee to target waste, fraud and abuse throughout federal contracting. And, she helped lead the effort to renew the Violence Against Women Act.

The purpose of the chair is to bring nationally known political leaders, scholars and activists to Iowa State to enrich the experiences of students and educate citizens about the role of women in the political process. McCaskill is the 25th woman leader to visit Iowa State through the sponsorship of the Smith chair.

The event is sponsored by the Catt Center and the Committee on Lectures, which is funded by the ISU Government of the Student Body.

U.S. Sen. Claire McCaskill, the first woman elected to the Senate from Missouri, is the spring 2014 Mary Louise Smith Chair in Women and Politics at Iowa State University. She will present “Women, Leadership and Politics: Taking Risks is ‘Ladylike’” at noon on Friday, March 28, in the Sun Room of the Memorial Union. The lecture is free and open to the public. 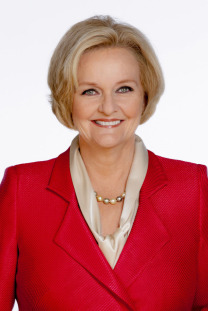