Salamanders are shrinking due to climate change, according to Iowa State researcher 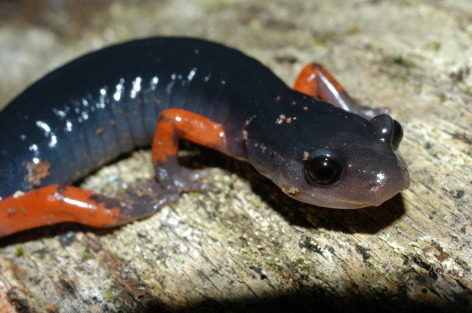 Some salamander species in the eastern United States appear to be shrinking as a response to their climate becoming warmer and drier, according to a study co-authored by an Iowa State University professor. Larger image. Photo courtesy of Dean Adams.

AMES, Iowa – A shift in climate can devastate a population of animals or force them to leave for a more suitable habitat. But certain species of salamanders in the eastern United States appear to be responding to climate change in an altogether different fashion.

Dean Adams, an Iowa State professor of ecology, evolution and organismal biology, said certain Appalachian salamander species are shrinking, losing an average of 7 percent of their body size in recent decades. During that same time, the climate the salamanders call home has gotten hotter and drier.

“There’s a growing body of evidence to suggest that changes in body size are a widespread response to climate change,” Adams said.

Adams co-authored a study published this week in the journal Global Change Biology that found that six of the 15 salamander species involved in the study showed significant reduction in body size over the last 55 years. The salamanders have a lifespan of about 15 years, meaning the size reduction has taken place over 13-15 breeding generations, a change that Adams called “very fast.”

“It works out to a reduction of about 2 percent per generation,” he said.

Salamanders are particularly susceptible to changes in their environment due to their permeable skin, he said. As the climate in the Appalachian regions studied in the paper becomes drier and warmer, the salamanders have access to less moisture. Their metabolism slows down, which results in less growth.

“Temperature and moisture are hugely important to salamanders,” Adams said. “They have a lot of exchange with the environment on a daily basis. One way they deal with warm and dry conditions is to become less active.  They forage less, and, ultimately, they grow less.”

How did the researchers know how big salamanders were 55 years ago? That’s where Adams came in.

He’s conducted a wealth of research on thousands of salamander specimens that have been systematically collected and preserved at the Smithsonian Institution over the decades. He said he and his team measured nearly 100,000 preserved salamanders for various projects, around 8,500 of which were used for the study.

If those specimens had never been collected, studies like this wouldn’t be possible, Adams said.

“We have this enormous repository of specimens, which provides us one way to glimpse into the past of these species and learn about their history,” he said. “Without that wealth of data, we’d miss a lot.” 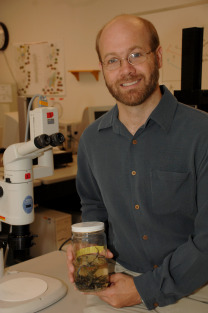 Certain species of salamanders in the eastern United States appear to be shrinking as a consequence of climate change, according to an Iowa State University professor.

“There’s a growing body of evidence to suggest that changes in body size are a widespread response to climate change.”