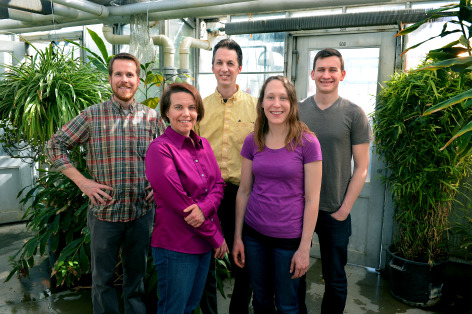 The “Nutrient Network,” a global grid of scientists who record and share ecological conditions at various sites, was co-founded in 2005 by Stanley Harpole, an assistant professor of ecology, evolution and organismal biology.

Data gathered through the Nutrient Network paved the way for a paper recently published in the journal Nature exploring the relationship among excess nitrogen, herbivores and plant biodiversity in grasslands all over the world.

The collaborative approach allowed more than 50 co-authors to contribute data, write and edit the paper. Including Harpole, five of the authors are based at Iowa State University, three of whom are Ph.D. students.

“One of the missions of this network is to get junior scientists involved and even take the lead in high-level science,” Harpole said. “People really benefit from the collaborative nature of it.”

Too much nitrogen, too little sunlight

The study gathered worldwide data on how nitrogen levels affect the number of plant species that can thrive in grassland environments across the globe.

The data suggest that increased nitrogen boosts the growth of large plants, which reduces the sunlight available to smaller plants that grow closer to the surface of the ground and constrains biodiversity, Harpole said.

Herbivores, or plant-eating organisms, can reverse that trend by munching and trampling on the larger plants, thereby allowing more sunlight to reach the ground, he said.

“Where the herbivores increase light levels, they can offset the loss of biodiversity caused by the imbalance in nutrients,” he said.

Harpole said the Nutrient Network allowed for the authors to compare a site in Iowa with sites in far-flung locations such as Australia, South Africa and Greenland, to name just a few.

Collaboration on a shoestring budget

The collaborative nature of the study allowed a trio of ISU graduate students to contribute to the project as co-authors. The students did everything from designing fences that keep out herbivores to monitoring the Iowa study site to editing drafts of the paper.

Lauren Sullivan, a graduate assistant in ecology, evolution and organismal biology who works in Harpole’s lab, said she worked extensively on the Iowa site throughout the study.

“It was nice to be able to see these trends when you focus on one site, but then you can see how these trends change across sites,” Sullivan said. “More science should be done that way.”

Harpole said the original idea for the network arose from conversations he had with colleagues at conferences. It started out as a ragtag alliance of researchers with little in the way of financial backing or formal infrastructure, but the network has helped to produce two papers published in Nature and another in Science.

“There’s a lot you can do with not very much,” Harpole said.

Brent Mortensen, a graduate assistant in ecology, evolution and organismal biology, said the Nutrient Network allows a wide range of researchers to contribute to sophisticated science. He said he attended the network’s annual workshop in Minneapolis last summer and came away with new contacts and fresh ideas for research.

“As a student, it’s really neat,” Mortensen said. “You get to interact with some of the luminaries in this field and take advantage of some great opportunities to network and get involved with other research.”

Biederman said she has worked on the Nutrients Network site in Iowa since 2009, and Williams, who is studying microbial ecology, said he worked primarily with soils for the paper.

A collaborative approach to gathering data spearheaded by Iowa State University faculty and students has revealed new insight into plant biodiversity and netted publication in a top scientific journal. The study gathered worldwide data on how nitrogen levels affect the number of plant species that can thrive in grassland environments across the globe.

“One of the missions of this network is to get junior scientists involved and even take the lead in high-level science. People really benefit from the collaborative nature of it.”