AMES, Iowa -- An Iowa State University alumnus, who is chief veterinarian at the Houston Zoo, will speak about wildlife conservation at his alma mater on April 21.

Joe Flanagan will present "That Horse Has Stripes! How Zoos and Veterinarians Are Helping to Save Wildlife" at 7 p.m. Monday, April 21, in the Memorial Union Great Hall. His talk is free and open to the public.

Set in a 55-acre lush tropical landscape, the Houston Zoo is dedicated to the conservation of endangered species. When not treating the animals at the zoo, Flanagan's conservation activities include providing medical care to the National Marine Fisheries Sea Turtle barn in Galveston, advising the Galapagos National Park and the Charles Darwin Research Station, and extensive work with U.S. Fish and Wildlife Service. His work with sea turtles has been detailed in the Houston Chronicle in 2011 and 2013.

Flanagan's talk is co-sponsored by National Affairs; the Zoo, Exotics, and Wildlife Club; and the Committee on Lectures, which is funded by the Government of the Student Body.

More information on ISU lectures is available online or by calling 515-294-9935. 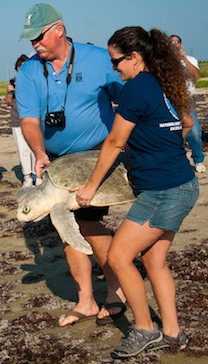 "That Horse Has Stripes! How Zoos and Veterinarians Are Helping to Save Wildlife"