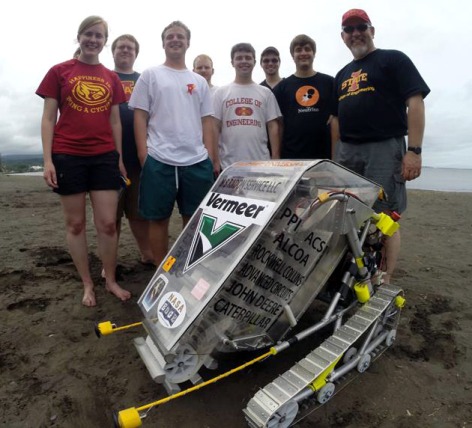 7-28-14 Update: There they were, at 10,000 feet on the remote and rugged slopes of the Mauna Kea volcano on the big island of Hawaii, running their robot through the same volcanic soil NASA uses to test space rovers. “This was otherworldly,” said Jim Heise, the faculty adviser for Cyclone Space Mining. Six teams of students from across the country mined soil in what was billed as the first “World Cup” of robotic space mining sponsored by Hawaii’s Pacific International Space Center for Exploration Systems. During the July 21-25 competition, Cyclone Space Mining continued to demonstrate the strength of its robot miner, taking first in the Best Design and Innovation Award and second in the Mining Award. In 40 minutes of mining, the Iowa Staters finished just 40 pounds short of the winning team from West Virginia University. The new competition also taught the team some lessons for the annual NASA contest in Florida. “There is so much we learned and so much we need to go through,” Heise said. “We do know we have an excellent design, but we did learn we need to do more with driver training.” On the flight home, in fact, he said students discussed how they could build an even better mining robot.

5-27-14 Update: A disappointing first round in the mining arena kept Cyclone Space Mining from defending its NASA title. But, the team still made its presence known at the NASA Robotic Mining Competition at Florida’s Kennedy Space Center. The Iowa Staters will forever be the contest’s first team to successfully run a fully autonomous mining robot. The result of that run was a huge haul of 500 autonomy points and the contest’s first-ever Caterpillar Autonomy Award. “It’s historic,” said Jim Heise, the team’s faculty adviser. “This is not easy. NASA has been working on full autonomy for eight years.” One result of that impressive run was an invitation to the first “World Cup” of robotic space mining. The international competition will be July 21-25 at the University of Hawaii at Hilo. The invitation has Heise and team members scrambling to check schedules, contact sponsors, raise funds and coordinate logistics. “The team is very proud of its performance,” Heise said. “The students are disappointed they couldn’t defend the Joe Kosmo Award, but they also understand their historic performance.”

AMES, Iowa – Even though other teams have started to copy some of their winning ideas, the student-engineers of Cyclone Space Mining feel good about defending last year’s NASA championship.

“That’s all right,” David Peiffer, a junior in industrial engineering from Marion and the president of Iowa State’s robotic mining club, said of the copycat teams. “We've had issues in the past and we've learned from them. We’ve improved.”

Iowa State’s team will show off its latest improvements May 19-23 during the NASA Robotic Mining Competition at the Kennedy Space Center Visitor Complex in Florida. The annual competition challenges university teams to design and build robots capable of maneuvering across a simulated Martian landscape while digging, collecting and dumping loads of gritty, dusty soil.

This year’s robot should be able to beat last year’s champ, said Brian Jend, a May graduate in mechanical engineering from Fitchburg, Wisconsin, and a project director for the space mining team.

That’s because the new machine is lighter, more functional and could even operate on its own. Peiffer and Jend said the improvements are in the details: lighter plastic for the machine’s 20 wheels, a track system connected by wires instead of belts, a better angle for the aluminum scoops that dig up the soil, a collection bin that’s easier to fill and dump.

And then there’s autonomous operation, a major goal for the team that’s worth a big bonus of 500 points.

Last year’s team came close, but had to fall back to remote control when the robot settled on a slope, tilting the machine and throwing its laser-guided control system over its target.

Jend said the team’s solution is an oscillating laser that should find its target, even if the robot hits a big slope.

“If you can run entirely autonomously and collect the minimum amount of material, you’d almost certainly win,” Peiffer said.

Jim Heise, a senior lecturer in mechanical engineering and the team’s faculty adviser, said the NASA contest is a great way for students to learn some engineering and get noticed by companies.

“They are a highly motivated bunch of students, from freshmen all the way to seniors,” he said. “They love working with NASA. And the level of hands-on work makes them excellent engineers – a lot of companies seek them out for internships and full-time jobs.”

The team’s experience and recent success has certainly created some confidence around the team’s workshop. The student-engineers aren’t really worried about copycats or defending last year’s title:

“It’s a different contest every year,” Jend said. “There might be pressure if I wasn’t confident about what we’ve built.” 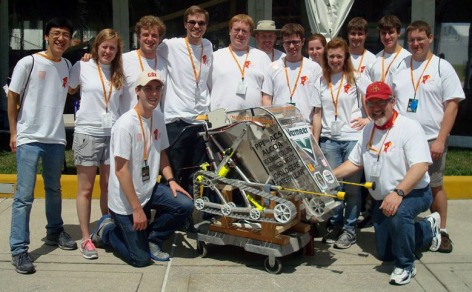 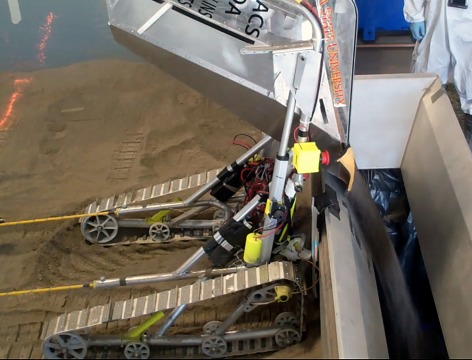 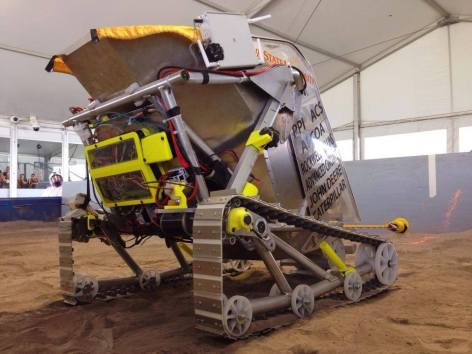 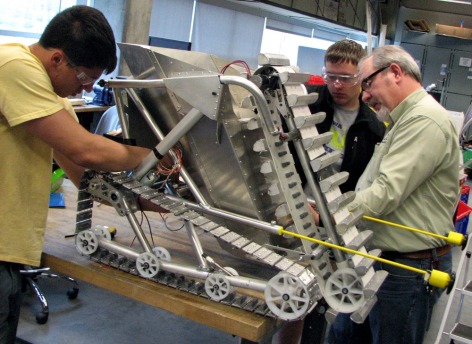 Members of Cyclone Space Mining assemble the team's robot during a recent workday in a campus lab. Left to right are Robert Prucha, a sophomore from Missouri Valley; Brandon Keesling, a sophomore from Oskaloosa; and Jim Heise, the team's faculty adviser. Larger image. Photo by Mike Krapfl. 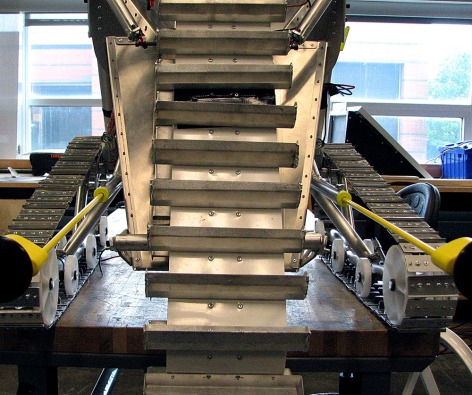 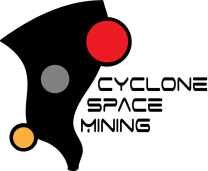 Cyclone Space Mining will defend its title in the NASA Space Mining Competition May 19-23 at the Kennedy Space Center Visitor Complex in Florida. Team members say they've improved last year's winning design and think they can haul in even more points.

“It’s a different contest every year. There might be pressure if I wasn’t confident about what we’ve built.”

Brian Jend, a project director for the space mining team.

“They are a highly motivated bunch of students, from freshmen all the way to seniors. They love working with NASA. And the level of hands-on work makes them excellent engineers – a lot of companies seek them out for internships and full-time jobs.”

NASA will broadcast the competition at the NASA EDGE website.

Here are the members of Cyclone Space Mining 2014: