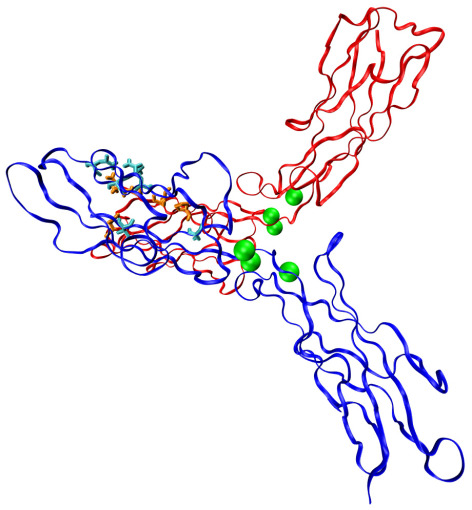 This ribbon diagram shows a pulling force applied to two common adhesion proteins called cadherins (red and blue) bound together in an X-shape. The green spheres represent calcium ions while the cyan and orange stick figures correspond to amino acids brought together as the force is applied. The hydrogen bonds that form between the amino acids create catch bonds that get stronger when pulled. Larger image. Image courtesy of Sanjeevi Sivasankar.

Those bonds are known as catch bonds and they’re formed by common adhesion proteins called cadherins. Sanjeevi Sivasankar, an Iowa State University assistant professor of physics and astronomy and an associate of the U.S. Department of Energy’s Ames Laboratory, has described catch bonds as “nanoscale seatbelts. They become stronger when pulled.”

But how does that happen? How can bonds get stronger under force?

Sivasankar and his research team have found long-lived, force-induced hydrogen bonds are the answer. A paper describing their findings, “Resolving the molecular mechanism of cadherin catch bond formation,” has just been published online by Nature Communications.

Sivasankar is the corresponding author. Co-authors are Kristine Manibog, an Iowa State graduate student in physics and astronomy and a student associate of the Ames Laboratory; Hui Li, of the Suzhou Institute of Biomedical Engineering and Technology of the Chinese Academy of Sciences in Suzhou New District, China; and Sabyasachi Rakshit, of the Indian Institute of Science Education and Research in Mohali, India. Li and Rakshit are former postdoctoral researchers in Sivasankar’s laboratory.

The team’s research was supported by grants from the American Cancer Society and the American Heart Association.

Sivasankar said strong cell-to-cell bonds are important to heart health and fighting cancer. He said the bonds connecting heart cells have to withstand constant mechanical forces. And, in some cancers, he said bonds no longer resist forces, allowing cancer cells to detach and spread.

To find the mechanism behind the strong ties created by catch bonds, Sivasankar’s research team began with molecular dynamics and steered molecular dynamics computer simulations based on data from previous experiments. They found that two rod-shaped cadherins bound together in an X-shape (called an X-dimer) form catch bonds when pulled and in the presence of calcium ions.

The calcium ions keep the cadherins rigid and ordered while the pulling brings parts of the proteins closer together. All of that allows a series of hydrogen bonds to form. These long-lived, force-induced hydrogen bonds lock the X-dimers into tighter contact.

Sivasankar said the researchers followed up the simulations with single-molecule experiments using atomic force microscopy. The experiments confirmed that cadherin X-dimers, when pulled and exposed to high calcium ion concentrations, formed catch bonds. Take away the force or the calcium ions, and catch bond formation was eliminated.

All of this, Sivasankar said, helps explain the biophysics of cell-to-cell adhesion. And that’s important to all of us.

“Robust cadherin adhesion,” the researchers wrote in their paper, “is essential for maintaining the integrity of tissue such as the skin, blood vessels, cartilage and muscle that are exposed to continuous mechanical assault.”

Strong cell-to-cell bonds are important to heart health and fighting cancer. The bonds connecting heart cells have to withstand constant forces caused by continuous pumping. And, in some cancers, bonds no longer resist forces, allowing cancer cells to detach and spread. Iowa State’s Sanjeevi Sivasankar and his research group are studying the biophysics of certain biological bonds. Their most recent findings have just been published online by Nature Communications.

“Robust cadherin adhesion is essential for maintaining the integrity of tissue such as the skin, blood vessels, cartilage and muscle that are exposed to continuous mechanical assault.”

From the researchers' paper in Nature Communications