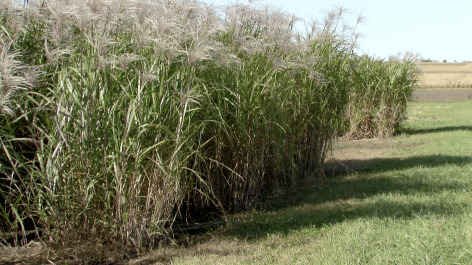 Miscanthus, a towering perennial grass pictured here, might be even better suited to growing in Iowa than previously thought, according to research by Iowa State University agronomists. Photo courtesy of Tyler Teske. Larger image.

AMES, Iowa – Miscanthus, a perennial grass with vast potential to produce biomass, would deliver even better yields than once thought in Iowa, according to research by agronomists at Iowa State University.

The research indicates that miscanthus, a towering grass native to Asia, could have a major role to play in the future of Iowa agriculture, both as a source of biomass for energy and as a means of protecting the environment, said Emily Heaton, an assistant professor of agronomy, project leader and co-author of the study.

The paper, published earlier this year in the journal Industry Crops and Products, looked at Miscanthus x giganteus, a sterile hybrid of the plant that cannot reproduce from seed and spreads slowly. The paper found that the miscanthus hybrid had low mortality rates when faced with harsh Iowa winters.

Heaton wrote the article with Nicholas Boersma, an assistant scientist in agronomy.

The paper also reports that yields in the second year of the study were not significantly lower than the third year. That’s important because miscanthus usually doesn’t hit its peak production until the third year, Heaton said.

Heaton is working to figure out just what place miscanthus and other perennial grasses should have in the Iowa agricultural landscape. She said between 10 and 20 percent of acres devoted to corn lose money for Iowa farmers every year. Those sections produce lower yields than the surrounding acres, usually due to patchy or poor soil conditions.

Those “subprime,” unprofitable acres may be better suited for a plant such as miscanthus, she said.

“There are spots in fields that don’t perform like the rest of the field,” Heaton said. “There’s a lot of land not consistently making money, and it would make more sense to plant perennial grasses on those acres.”

The miscanthus variety Heaton is studying doesn’t reproduce on its own, a feature that would keep the plants from becoming invasive pests to farmers. The variety also produces an abundance of biomass that can be burned for energy or converted into fuel.

Heaton said she’s studying a range of perennial grasses for their suitability to Iowa farmland. She said miscanthus is an important part of the equation, but switchgrass and prairie cordgrass also show promise.

Her vision for Iowa’s farmland resembles a patchwork quilt where perennial grasses and prairieland grow alongside corn and soybeans. And the benefits of such a system would be every bit as diverse, she said.

Heaton said the environmental benefits of perennial grasses could outweigh the monetary gains of new sources for biomass. When planted on marginal and subprime land, the grasses prevent soil erosion and protect water quality.

“I don’t want miscanthus to be a one-hit wonder,” she said. “It’s about building a portfolio of perennial grasses that will complement corn and soybeans, providing biomass and environmental benefits.”

Miscanthus, a perennial grass with vast potential to produce biomass, would deliver even better yields than once thought in Iowa, according to research by agronomists at Iowa State University. Planting the towering grass in low-yielding sections of fields could create a wealth of new biomass and benefit the environment.

“There are spots in fields that don’t perform like the rest of the field. There’s a lot of land not consistently making money, and it would make more sense to plant perennial grasses on those acres.”