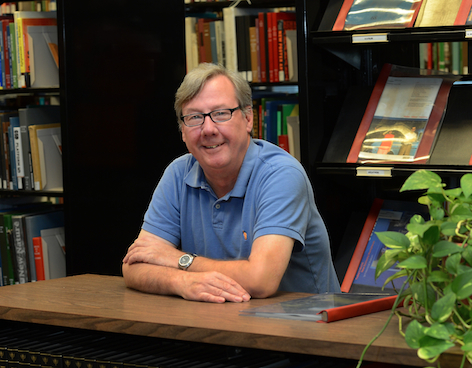 AMES, Iowa -- Sometimes in the high-stakes world of commercial design, even the best ideas get shelved. That happened to Will Prindle about 10 years ago when he was vice president of design and development at Forms + Surfaces, which creates architectural products for public spaces worldwide. His idea and designs for an explosion-resistant public trash receptacle were scrapped.

Now an assistant professor of industrial design at Iowa State University, Prindle has retrieved his discarded idea from the corporate junkyard. And he intends to see it through to the marketplace.

"This project has a lot of validity still, especially after the Boston Marathon," Prindle said. "The receptacles could be used in shopping malls, light rail stations and at public events — which are considered 'soft targets' because they are relatively unprotected areas or vulnerable to an attack."

It's the proverbial win-win to salvage his trash can now. Finalizing and testing the design and technology is Prindle's first research project as an academic. Manufacturing the waste receptacles offers commercial potential for Iowa. And once proven, the technology presents endless possibilities for his Iowa State design students to create other explosive-proof architectural products, like doors, barricades and walls.

In Prindle's design, the trash can (or recycling container) looks like a common receptacle used on sidewalks and in public venues. On the interior, however, a cylinder is lined with shock-absorbing concrete wrapped in a reinforced material. Prindle's calculations predict that the combination of the two materials will withstand the equivalent of 1.5 pounds of TNT. 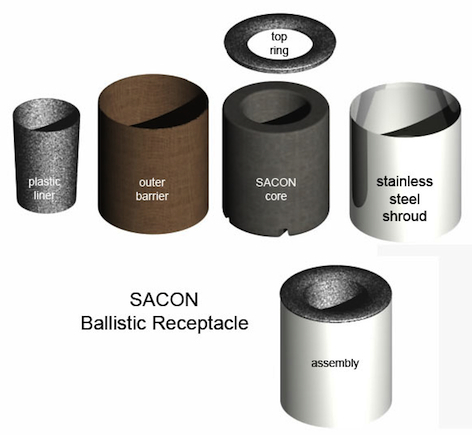 Both materials are commercially available, but their combination for this purpose is Prindle's intellectual property. After his recent promotion from lecturer to tenure-track faculty at Iowa State, Prindle requested and received the rights to develop his designs from his former employer.

The shock-absorbing concrete was developed by the U.S. Army Corps of Engineers at their Engineer Research and Development Center's Geotechnical and Structures Laboratory in Vicksburg, Mississippi. Known as Sacon, it is used for military and law enforcement training facilities, such as grenade houses and live-fire structures.

After extensive research on ballistic-resistant materials 10 years ago, Prindle determined Sacon was the most appropriate for his design.

"Sacon is cast into blocks and not only absorbs the blast, but also captures the shrapnel, so it doesn't ricochet around," Prindle said. "It will direct the blast upwards as opposed to sideways and out. Some shrapnel will come upwards, but the danger zone for injuries is sideways."

And it is low cost and can be licensed to produce locally. Prindle knows of no other application of Sacon in commercially available products.

Prindle is in contact with the Corps' researcher he worked with on his preliminary design years ago. At that time, the laboratory in Vicksburg was interested in working with Prindle to develop the receptacle and test his prototypes.

"They thought the receptacle was a great idea and told me when I had some prototypes produced, they'd blow them up for me to test the effectiveness," he said.

The second material in Prindle's design is a reinforced architectural material with "huge tensile strength" that will be wrapped around the Sacon cylinder to keep it stable.

Prindle is refining his preliminary design ­— which also needs to function as a trash receptacle — and will begin building prototypes soon.

"I'm at the point where I can only learn by building and blowing them up," he said. "I'll build prototypes here and ship them to Vicksburg."

He will watch the experimentation, refine the design as needed and build new prototypes to test. Once the design is proven, Prindle will pursue manufacture of the trash receptacle through Iowa companies that make similar products.

He hopes to have a reliable prototype to take to market within a year.

"Then I'll bring the product into the studio classroom for students to create new products or styles that expand the line. The material could be used architecturally specifically for its ballistic properties," he said.

"We've already had some interest from a major door manufacturer."

Prindle came to Iowa State in 2011. During his 35-year career as an industrial designer, more than 1,000 of his designs were produced for companies such as Anchor Hocking, Museum of Modern Art (New York), Crate and Barrel, Dansk Designs, Gorham Silver, Oneida Housewares and Starbucks Coffee. Prindle holds numerous patents, both foreign and domestic.

About 10 years ago when Will Prindle was vice president of design and development at Forms + Surfaces his idea and designs for an explosion-resistant public trash receptacle were scrapped. Now an assistant professor of industrial design, Prindle has retrieved his discarded idea from the corporate junkyard. And he intends to see it through to the marketplace.

"The receptacles could be used in shopping malls, light rail stations and at public events — which are considered 'soft targets' because they are relatively unprotected areas or vulnerable to an attack."