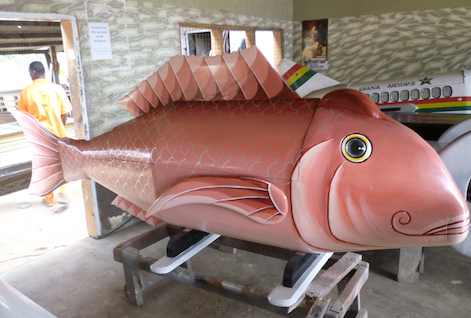 A fantasy coffin in the shape of a fish.

AMES, Iowa -- Ghana's leading fantasy coffin artist will be an artist-in-residence in Iowa State University's Integrated Studio Arts Department, Sept. 15 -19. Eric Adjetey Anang will give a presentation about this ethnic art. And he will offer workshop demonstrations of his processes while he sculpts a fantasy coffin unique to Iowa. The presentation and demonstrations are open to the public. 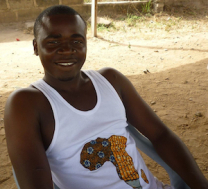 Ghanaian fantasy coffins are exhibited in museums and galleries throughout the world, and Anang's creations are highly sought after by collectors of contemporary ethnic art. He is recognized for keeping the art alive.

A traditional folk art unique to the Ga people of southern Ghana, fantasy coffins are functional, customized coffins sculpted and painted to be figures or objects that represent the deceased. For example, a fisherman might have a coffin formed like a fish, or an airplane shape might symbolize someone who always hoped to travel. Many coffin shapes also suggest local proverbs.

"The Ga believe that death is simply another step in life, the dead are moving into another world," said Chris Martin, associate professor of integrated studio arts. "They also believe that their ancestors are more powerful than the living, so they are driven to appease them, and the fantasy coffins are one way."

Anang’s presentation, "Going Out in Style: The Folk Art of Fantasy Coffins," will be at 8 p.m. Monday, Sept. 15, in the Memorial Union Great Hall.  He will describe the history of his family’s carpentry business, which began with making elaborate palanquins (conveyances carried on poles) and coffins for tribal chiefs in villages and towns in and around Accra. Anang's grandfather, Seth Kane Kwei, is credited with founding the fantasy coffin tradition in the early 1950s.

Martin's furniture design classes are hosting Anang, who will create a fantasy coffin while demonstrating his traditional woodworking processes. He will work on the lower level patio behind the Design Building during the mornings: 8-11 a.m. on Monday, Wednesday, Friday, and 9:30-11 a.m. on Tuesday and Thursday. Anang will sculpt a coffin to look like an ear of corn.

Martin plans to auction the coffin as a fundraiser for an ISU Engineers Without Borders project to develop a water retention system in a drought-prone village in Ghana. Martin, a former Peace Corps volunteer in Ghana, introduced the group to the project. 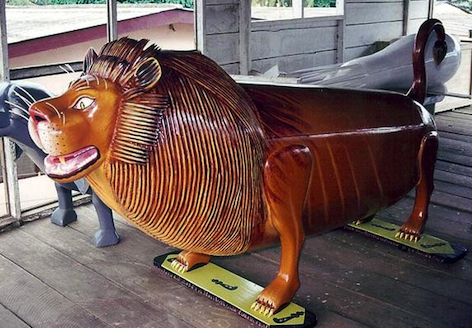 A fantasy coffin in the shape of a lion.

While in the United States, Anang also will do a residency at The Center for Art in Wood in Philadelphia, and conduct workshops at the Oregon College of Arts and Crafts and the University of New Hampshire.

Fantasy coffins have been featured in National Geographic, on "CBS Sunday Morning," in the book "The Fantasy Coffins of Kane Kwei," and in the documentaries "The Master of Coffins" (Brazil), "Going Out in Style" (Great Britain), and "Ghana: Customized Coffins" (France).

Anang's visit is co-sponsored by the College of Design Lectures and Exhibitions Committee and the ISU Committee on Lectures, which is funded by the Government of the Student Body. Additional information is available from Chris Martin, chmartin@iastate.edu.

"Going Out in Style: The Folk Art of Fantasy Coffins"

All are free and open to the public