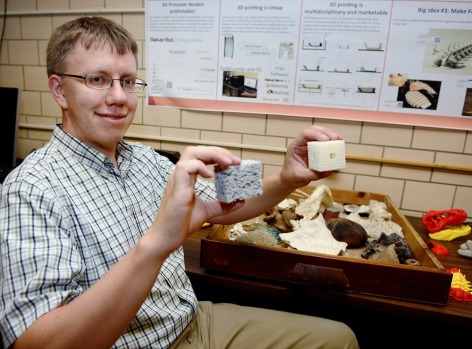 AMES, Iowa – Franek Hasiuk grabbed a little red ball and said it’s not every day you pick up Mars.

But there it was, a Mars model about the size of a golf ball and just detailed enough to show Olympus Mons, a Martian volcano nearly 14 miles high and three times the height of Mt. Everest.

“You get a sense of how high it sticks up from the rest of the planet,” said Hasiuk, an Iowa State University assistant professor of geological and atmospheric sciences and David Morehouse Faculty Fellow. “It’s just spectacular.”

That little globe is just one product of Hasiuk’s Geological Fabrication Laboratory (or GeoFabLab), a narrow corner room in the basement of Iowa State’s Science Hall. The lab specializes in 3-D scanning and printing – as it says on the lab website, it’s all about “making things geological!”

Hasiuk, who came to Iowa State two years ago from the oil and gas industry, said a research and teaching goal has been to find “projects that students could work on that would make them interesting to industry – and employable.”

When he worked in industry, Hasiuk used 2-D CT scans to study the pores within limestone reservoir rocks. It’s a major industry challenge to understand fluid flow through the pore networks of rocks so oil can be extracted from the smallest pores.

When Hasiuk arrived on campus, he found researcher Joseph Gray and the CT tools at the Center for Nondestructive Evaluation. That led to 3-D scans and then 3-D prints of rock porosity.

“We’re taking really small holes in rock and then printing them at magnification,” Hasiuk said. “We’re not getting perfect photocopying yet, but we’re getting there.”

With better scans, data management and 3-D prints, “We can make models of pore networks and see how fluids flow through them,” he said. “Eventually, we’ll get to the point of making predictions and increasing the accuracy of predictions. What geology does for the economy is reduce uncertainty when you need to get something from underground – like oil and gas.”

Hasiuk said the oil and gas industry is showing significant interest in the research project.

While printing the reservoir rocks, Hasiuk discovered something about the tools he was using:

“3-D printing is a great communication tool,” he said. “You don’t have to teach someone a shape. You can understand by touching.”

And so he’s also using the GeoFabLab’s scanner and two 3-D printers (purchased with his faculty startup package and student computer fees) to print materials for geology classes.

As he wrote in a paper (“Making Things Geological: 3-D Printing in the Geosciences") published this summer by the Geological Society of America, “Geoscientists are some of the most prolific producers of three-dimensional (3-D) data. These data do not belong in our computers – they belong in our hands.”

In his own classes, Hasiuk has printed plastic fossils, crystals, dinosaur bones and even the topography of Ames south of campus, including Jack Trice Stadium. To spread the word about 3-D printing for classrooms, he’s made the data for about 100 of his 3-D models available on the Internet. And he’s collaborated with the Science Education Resource Center at Carleton College in Northfield, Minn.

Hasiuk notes that it makes a lot of sense to replace fragile, $10 to $50 classroom specimens with 25-cent pieces of printed plastic. But that’s not the first point he makes about the advantages of printing 3-D models for the classroom.

“These sort of things get people engaged,” said Hasiuk, pointing to a T. rex skull with a moving jawbone that he printed in Iowa State cardinal and gold. “These are chomp-able, flexible fossils. Using this technology, the GeoFabLab can bring dead things to life.”

Iowa State's Franek Hasiuk is using 3-D printing to study the pores within limestone reservoir rocks. A better understanding of the pore networks within the rocks could help industry get at the oil in the smallest pores. Hasiuk is also using the scanning and printing technology to engage students in geology classrooms.

“3-D printing is a great communication tool. You don’t have to teach someone a shape. You can understand by touching.”

“These sort of things get people engaged. These are chomp-able, flexible fossils. Using this technology, the GeoFabLab can bring dead things to life.”