Gender barriers: ISU professor looks at history of discrimination against women in engineering 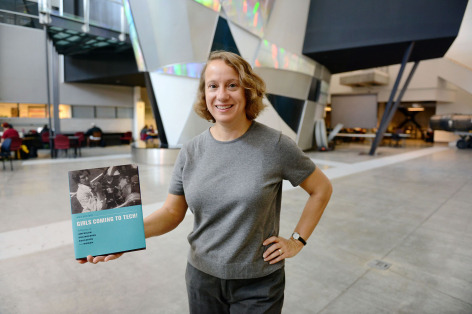 In her book, ISU's Amy Bix looks at the obstacles women have faced to gain acceptance to engineering programs. (Larger image) Photo by Amy Vinchattle

AMES, Iowa – To better understand the striking gender divide that still exists today in engineering, it is necessary to look at the history of the field, said Amy Bix, an associate professor of history at Iowa State University. Unlike other fields, such as science and medicine, in which women slowly gained access by starting as research assistants or nurses, it was more difficult to get a foot in the door in engineering.

The fact that engineering started as a military profession is a primary reason why. West Point, which did not admit women until 1976, was the first place in the U.S. to teach engineering, Bix said. Plus, most engineering jobs did not require a degree and instead grew out of on-the-job-training in construction and industry, jobs predominantly held by men. Bix said all these factors contributed to the image of engineering as a field dominated by males.

“In the late 1800s and early 20th century, they even had radio programs and books that talked about engineers clearing roads through the African jungle, bringing civilization and bridges to South America, and irrigation to California, so they really emphasized the macho nature of field work,” Bix said. “Basically, engineering became this group of traditions that associate engineering with masculinity and that really persisted well into the 20th century.”

In her book, “Girls Coming to Tech!: A History of American Engineering Education for Women,” Bix looks at how women fought to overcome these stereotypes by gaining acceptance to engineering programs at MIT, Cal Tech and Georgia Tech. The push started following World War II, after women, who had filled engineering and production roles during the war, lost those jobs when men returned home.

Broader changes in American culture, including the feminist movement, also helped to break down the barriers women faced in education. Still, there was strong opposition from students, faculty and alumni of engineering programs, Bix said. Through her research, she found dozens of articles that described the inclusion of female students as an “invasion” of the program.

“The thing that struck me is that even though it’s just one or two women studying engineering, the word invasion was used over and over again,” Bix said. “It gives you a sense of just how much male ownership there was in engineering that one or two women come in and it’s an invasion.”

In the book, Bix gives several examples of how a small group of women and their allies at these schools were in the right place at the right time to initiate change and make a difference.

In the classroom and in her role as director of ISU’s Center for Historical Studies of Technology and Science, Bix often shares these stories with young female students. The response from many students is often shock at the discrimination and harassment women faced. The reaction is encouraging for Bix, who sees more confidence and support for women in engineering, but there’s still room for improvement.

“Things have changed so much for many female students; this whole history of how difficult it was for earlier generations is a real revelation,” Bix said. “But then I talk with other female engineering students who still get the harassment, they still experience being the only woman in class, and for them it’s still a very different experience.”

In her next book, Bix wants to focus on whether programs designed to encourage girls to pursue careers in engineering, as well as tech games and toys, make a difference. She is also interested in the timing of when girls are introduced to these programs.  It is too late to wait until college to get young women interested in the field, she said.

“It’s striking to realize what has changed. There are still ongoing issues today for women in engineering studies, but nowhere near the outright hostility; it’s simply not acceptable today,” Bix said. “Statistically, we’re not anywhere close to parity, but I think it’s become accepted that we need to work to make women and minorities feel more comfortable in engineering.”

In June, Bix was recognized by the Women in Engineering ProActive Network. She received the WEPAN Betty Vetter Award for Research, which recognizes notable achievement in research related to women in engineering. “Girls Coming to Tech!” is available through Cambridge: MIT Press.

In her book, “Girls Coming to Tech!: A History of American Engineering Education for Women,” Amy Bix looks at how women fought to overcome gender stereotypes by gaining acceptance to engineering education programs.

“Things have changed so much for many female students; this whole history of how difficult it was for earlier generations is a real revelation. But then I talk with other female engineering students who still get the harassment, they still experience being the only woman in class, and for them it’s still a very different experience.”