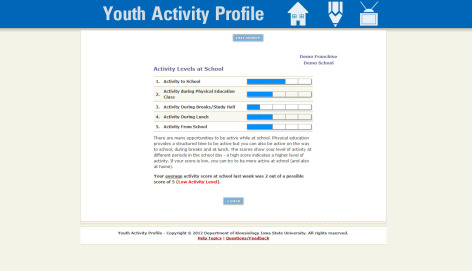 The Youth Activity Profile is an online tool that educators and researchers can use to accurately measure a child's physical activity. (Larger image)

AMES, Iowa – To improve health and help combat childhood obesity, more schools are changing physical education requirements and finding new ways to keep children active throughout the day. It’s recommended that children get at least 60 minutes of physical activity a day. Schools are generally expected to provide at least half of this, or 150 minutes of physical activity a week, said Greg Welk, a professor of kinesiology at Iowa State University.

The ISU research team was recently awarded a $400,000 National Institutes of Health grant to improve the methodology and measurement of the Youth Activity Profile. Welk said factors such as climate, socioeconomic status and living in rural or urban areas all impact physical activity behaviors. The grant will specifically allow the team to refine the calibration to ensure that it can work in different regions and different seasons.

This is an important priority since the tool has been adopted by the widely used FITNESSGRAM youth fitness program. The tool also has the potential to advance research on youth activity behavior. Welk and his team are using the tool in a large school-based project evaluating the impact of NFL Play 60 programming. Historically, schools have only measured fitness levels, but the Youth Activity Profile makes it possible to accurately assess physical activity behavior in large groups of children, Welk said.

“The problem is it’s very hard to change fitness; it’s influenced largely by genetics and it requires a lot of activity to move fitness,” Welk said. “Physical activity is something that can be changed more readily through programming, so it is a better outcome measure for school-based applications.”

To improve the Youth Activity Profile’s accuracy, researchers must take into account common sources of measurement error that plague self-report measures. Adults often have trouble recalling their activity throughout the day and it is even more difficult with children, Welk said. The NIH grant will allow researchers to account for and correct that error and create prediction algorithms that could be used across the country.

The research is led by Welk and post doctorate researcher Pedro Saint Maurice, along with a team of graduate students in the Physical Activity and Health Promotion Lab.

Improving measurement tools is just part of the effort to get children moving more. Welk and his team have taken action to help promote physical activity and fitness in schools by creating a participatory research network called the Iowa FITNESSGRAM Initiative. They work with more than 80 schools in central Iowa to more effectively use FITNESSGRAM and associated activity programming. Schools are provided with access to FITNESSGRAM software and other tools such as the Youth Activity Profile.

“The participatory nature of the project allows us to evaluate school programming under real-world conditions,” he said.

Welk serves as the scientific director of FITNESSGRAM and launched the initiative to develop and test ways to help children to exercise more, spend less time watching television and develop a healthful diet. Schools can impact youth physical activity by offering intramural programs before and after school, encouraging students to walk or bike to school and incorporating more movement in the classroom, not just during physical education classes.

Active children decrease their risk of obesity and other diseases, do better in school and are less likely to suffer from anxiety and depression, according to a report by the U.S. Department of Health and Human Services. Instilling positive habits at an early age will also pay dividends later in life, Welk said.

More information about the Iowa FITNESSGRAM Initiative is available at: http://www.iowafitnessgram.org/.

To improve health and help combat childhood obesity, more schools are changing physical education requirements and finding new ways to keep children active throughout the day. However, the challenge for both educators and researchers is accurately measuring the time children spend performing physical activity. That’s why Welk and a team of Iowa State researchers are working to improve the Youth Activity Profile, a tool designed to help schools assess children’s physical activity behavior. 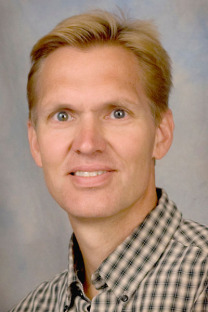 “The problem is it’s very hard to change fitness; it’s influenced largely by genetics and it requires a lot of activity to move fitness. Physical activity is something that can be changed more readily through programming, so it is a better outcome measure for school-based applications.”