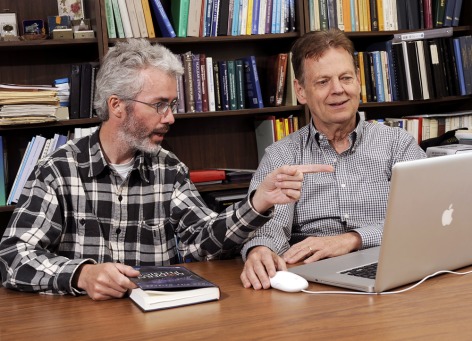 Iowa State University's Pieter Maris, left, and James Vary will get a head start on scaling up their computer codes for the Energy Department's next-generation supercomputer. Larger image. Photo by Bob Elbert.

AMES, Iowa – A team of Iowa State University nuclear physicists is preparing to scale up its computer codes for Cori, the next-generation supercomputer being developed by the National Energy Research Scientific Computing Center.

Iowa State’s Pieter Maris and James Vary want to use the supercomputer to study the basic physics of the burning sun and exploding stars. Those studies could one day lead to safer, more efficient forms of nuclear power.

“We’ll work with a select group of top computer scientists and applied mathematicians to co-develop new math algorithms and new schemes in order to get the best science out of this new supercomputing architecture,” said Vary, an Iowa State professor of physics and astronomy.

The $70 million supercomputer is expected to go online in 2016. It’s named after Gerty Cori, the first American woman to win a Nobel Prize in science. And it’s being developed by the National Energy Research Scientific Computing Center based at Lawrence Berkeley National Laboratory in Berkeley, Calif. The center is the primary high-performance computing center for scientific research sponsored by the U.S. Department of Energy’s Office of Science.

Cori is designed to be extremely energy efficient, lowering one of the barriers to developing supercomputers at the exascale – machines capable of a quintillion calculations per second.

Research teams across the country recently competed for a head start on scaling up their codes for Cori. The 20 winners will now work with staff from the computing center and with Cori’s developers from Cray Inc. and Intel Corp.

Those research teams “will be doing the ‘heavy lifting’ during the project and will help us ensure that the workload is ready when Cori is deployed,” Harvey Wasserman of the computing center said in a statement. “This exciting machine architecture is now being followed by exciting science in the national interest.”

The Iowa State research will be led by Maris, a research associate professor of physics and astronomy. He and Vary have collaborated on other projects and have won supercomputing time to study the structure and reactions of rare and exotic nuclei.

They’ll use Cori to study two classes of nuclear states – the weakly bound states and the resonant states – in the nuclei of various isotopes of light elements such as hydrogen, helium, lithium and beryllium. Isotopes of the elements contain varying numbers of neutrons and often have very short lifetimes yet play critical roles in nuclear fusion, a valuable energy source for the future.

Helium-4, for example, is stable and has two protons and two neutrons. But the isotope helium-6 has two extra neutrons and quickly decays.

Those neutrons can be weakly bound to the nucleus or, in a resonant state, the extra neutrons come and go, forming a kind of cloud around the nucleus.

So why do we need to understand those isotopes and their reactions? And why would the energy department include a study of them in its latest supercomputer project?

First, Vary and Maris have already developed supercomputer software (called “Many Fermion Dynamics – nuclear physics”) to study isotopes, their structures and their reactions, studies that are very difficult and expensive to do in a laboratory.

That, he said, could lead to a much better understanding of fusion and fission energy.

“The value of precise information about how fission works is the ability to design better reactors, reactors with less waste and more safety,” Vary said. “We need the basic science to predict what’s unknown. And that can help the fission and fusion energy industries.”

Iowa State's Pieter Maris and James Vary will scale up their computer codes for Cori, the Energy Department's next-generation supercomputer. They'll study two classes of nuclear states to understand the basic physics of the burning sun and exploding stars. What they learn could one day lead to safer, more efficient forms of nuclear power.

“The value of precise information about how fission works is the ability to design better reactors, reactors with less waste and more safety. We need the basic science to predict what’s unknown. And that can help the fission and fusion energy industries.”

James Vary, an Iowa State professor of physics and astronomy