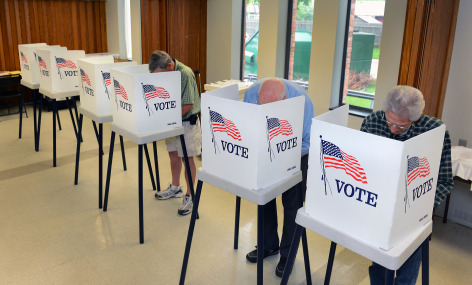 AMES, Iowa – What issues will influence voters at the polls? Will Iowa elect its first woman to Congress? And what is the role of social media in this election? Iowa State University political experts are available for interviews to answer these questions and discuss other issues leading into the November election.

Andersen points to the political discourse in Congress and the inability to get past partisan bickering as fuel for the rising sentiment of frustration among voters. With all of the finger pointing in Washington, he says voters are fed up with both parties and politics in general.

“People want something to change. It’s extremely frustrating for voters to feel disempowered and know that they can be politically active, but the situation is not going to change,” Andersen said. “It’s a really sad state of affairs in my opinion, but that’s the case. Government is about solving the nation’s problems, or at least tackling them, and when the two parties just agree not to work together that’s a sad state of affairs.”

President Obama’s low approval rating would indicate that Republicans stand to gain control of the Senate, but that is not being reflected in many polls, Andersen said. Instead, several polls show voters do not believe anything will change regardless of which party controls the Senate. As a political scientist, he is interested if the political wrangling will continue or if there will be some compromise if Republicans gain control of the Senate.

Moving past this partisan roadblock won’t be easy, but Andersen can talk about what needs to happen to bring about a change. In addition to voter behavior, Andersen is interested in the influence of social media and can discuss how candidates are using it in this election to build their base of support.

With women running for open seats in two congressional races, this could be the year Iowa sends a woman to Washington, Bystrom said. Research shows that since 1992 men and women running for U.S. Congress have an equal shot at winning depending on their status as a candidate. Incumbents win at a higher rate than challengers, regardless of gender. Bystrom said a woman running for an open seat has a slightly better than 50 percent chance of winning.

“The best chance for a woman to win a race for Congress is as an incumbent, which Iowa has never had, or in an open-seat race, which Iowa has rarely had in the past 20 or more years,” Bystrom said. “Other factors can also affect the chances of a woman winning an open seat race to the U.S. Congress, including her ability to raise money as well as the political culture of the state.”

Bystrom said on average women raise just as much, or more, than men in congressional races. States with voters who elect more women to state legislatures and higher office tend to have more moderate to liberal political ideologies, more urban than rural populations, more growing and diverse populations, and less religious fundamentalism, she added.

The race to replace Iowa Sen. Tom Harkin is one of the two open seat races. Bystrom said the gender gap may be the difference in this race between Republican Joni Ernst and Democrat Bruce Braley. Although recent polls show Ernst with a six-point lead among voters overall, the gender gap – which is defined as the difference between women and men voting for one candidate – may work in Braley’s favor. The reason why? Women are the majority of the population, they vote in higher percentages than men and they tend to vote for Democrats, Bystrom said.

McCormick is watching how foreign policy will impact the Senate race in Iowa as well as nationally. The topic received little attention during a recent debate between Braley and Ernst. However, in the New Hampshire Senate race, McCormick said that Republican Scott Brown appears to be focusing extensively on foreign policy issues.

“My sense is that foreign policy, and the ISIS issue, will enter the race in terms of America's position in the world and President Obama's leadership,” McCormick said. “I assume that Republicans will attach it to Obama and the perception that he has not provided strong leadership in the world and that America's global position has eroded.”

McCormick expects that immigration is another issue that will generate a lot of debate. McCormick can also talk about the situation in the Middle East, President Obama’s foreign policy leadership and how it will affect key Senate races, as well as interest groups lobbying on foreign policy issues.

Immigration continues to be a highly debated topic, but Prieto sees little incentive for Congress to act on the issue. Since 9-11, immigration reform has become such a controversial topic that politicians tend to avoid it, Prieto said.

“There are many politicians who are willing to scare the public by directly tying the realities of immigration to terrorist threats. There are many issues surrounding immigration that have nothing to do with terror,” he said. “The other problem is that we fail to recognize or remember that our country has had a very strong dependency on Latin American labor, specifically Mexican labor, throughout the entirety of our nation’s history.”

That is one reason why the need for change is long overdue. Prieto said immigration laws and quotas are outdated and do not reflect the economic needs in this country.

“Many of the quotas for immigration are remarkably out of step and out of proportion with the amount of labor that we need in this country,” Prieto said. “History teaches us that we in the United States have wedded ourselves heavily to our neighbors in the southern part of this hemisphere and we need to accept that instead of throwing up walls, both metaphorically and literally, that do no good.”

Increasing quotas is just a part of the solution. Prieto said meaningful immigration reform must be a multi-step approach, which includes simplifying the process and making it more affordable. Eventually, companies that depend on immigrant labor must come to the table and offer higher wages, benefits and guarantee better protections for workers, Prieto said.

Unfortunately, the lack of compromise in Congress makes this seem unlikely. Prieto can also talk about how this issue will impact Latino voters. He said it would be a mistake to think this issue will completely solidify the Latino voting bloc.

While political ads (primarily negative, attack ads) dominate on television and radio, Schmidt said the secret to winning in 2014 is the ground war.

“In other words, it depends on who has the best team to contact voters and the most sophisticated early voting plan, which Democrats do at this point,” Schmidt said. “It also depends on which side has the best Election Day turnout technology and troops on the ground to drive folks who need a ride to the polls.”

Schmidt is watching competitive races in Iowa, Arkansas and Alaska, which will determine whether Republicans take over or Democrats maintain control of the Senate. In Iowa, the race between Braley, who was considered to be the frontrunner, and Ernst is much closer than originally expected. Schmidt said that is due in part to mistakes made by the Braley campaign and because Ernst proved to be an attractive and marketable candidate.

Other observations on this mid-term election: Schmidt said President Obama’s low approval rating is a disadvantage for Democrats who would typical rely on the president for campaign help. However, Schmidt can discuss how presidential “coattails” rarely trump local or state values and concerns. He can also talk about the Iowa governor’s race and how voter enthusiasm might impact other Democratic candidates.

You can reach Schmidt at sws@iastate.edu.

Shelley is available for comment on domestic policy issues and U.S. House and Senate races. His research focuses on health care, education, aging and disability, and family policy. Shelley said attention to these issues varies depending on the state and the race, but education and health care seem to be resonating with voters.

For example, the Affordable Care Act, or Obamacare, continues to be a flashpoint used in several political ads, Shelley said. Both sides of this debate argue that nothing should come between you and your doctor, but they are driven by ideological and partisan differences on how health care spending should be prioritized.

“People who favor Obamacare tend to favor more spending on health care in general as a preventative measure. Those who oppose Obamacare want to limit spending and any type of public ownership or government role in how health care is administered,” Shelley said.

Education funding, for higher education to K-12, and the debate over Common Core academic standards are two other issues that Shelley expects will play out along party lines.

What issues will influence voters at the polls? Will Iowa elect its first woman to Congress? And what is the role of social media in this election? Iowa State University political experts are available for interviews to answer these questions and discuss other issues leading into the November election.