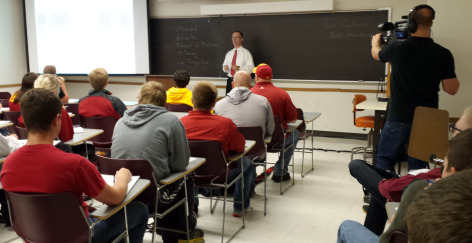 Timothy Wolters talks about King George's War in a lecture to be featured this weekend on American History TV.

AMES, Iowa – The War of Jenkins’ Ear in North America and King George’s War are often overshadowed by the French and Indian War, said Timothy Wolters, an associate professor of history at Iowa State University. For that reason, Wolters decided to focus on the two conflicts for his class lecture on C-SPAN’s American History TV. The segment will air at 7 p.m. and 11 p.m. on Saturday, Oct. 11.

Wolters, also a reservist in the U.S. Navy, teaches American Military History, which covers material from the 17th century to the present. He said the two conflicts, while not as prominent in history books, are still important.

“The story is a fascinating one of success, failure, and from the perspective of the British colonists in New England, betrayal.  Although we now know the fortress at Louisbourg was not quite as impressive as advertised, William Shirley's plan to seize it was incredibly audacious. French efforts to recapture the fortress in 1746 contain all the elements of a Greek tragedy, from a heaven-sent storm to the Duke of Anville's untimely demise,” Wolters said. 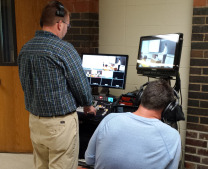 A main takeaway from the lecture, for students and viewers at home, is the fact that two groups of British colonists, first in the Deep South and later in New England, successfully banded together in a time of crisis, Wolters said. This provided useful military experience and fostered a stronger sense of community.

C-SPAN’s American History TV features event coverage, lectures and discussions with teachers and historians every weekend on C-SPAN 3. More information about Wolters’ lecture can be found at: http://series.c-span.org/History/Events/Lectures-in-History-Colonial-America-amp-King-Georges-War/10737444971/.