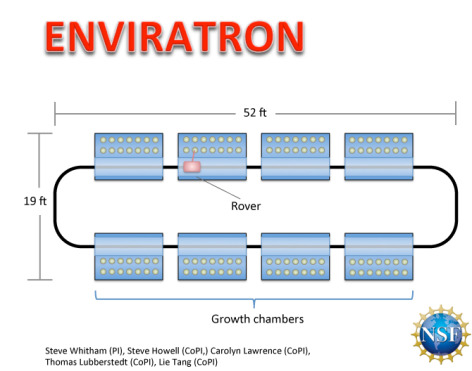 The Enviratron will consist of several growth chambers that grant access to a robotic rover. The rover, equipped with a range of sensors, will examine the plants in each chamber and collect vast amounts of data as the plants develop. Image courtesy of Stephen Howell. Larger image.

AMES, Iowa – Iowa State University faculty members are developing a new facility that will utilize a specially designed robot to gather unprecedented amounts of data on the growth of plants under different environmental conditions.

The project was funded recently by a $929,773 grant from the National Science Foundation. ISU personnel plan to have a prototype of the plant-growth facility next year and a completed facility with as many as eight growth chambers in three years.

“Everything has to be created from the ground up,” said Steven Whitham, a professor of plant pathology and microbiology and the primary investigator of the project.

The specialized growth chambers will be built by Percival Scientific, a company based in Perry, Iowa, said Whitham, the director of the ISU Center for Plant Responses to Environmental Stresses.

Researchers will control environmental conditions such as temperature, moisture, light and carbon dioxide concentration in each chamber, which will simulate the effects of climate change on the early development of plants, Whitham said.

The ISU team is calling the concept the “Enviratron,” and if that sounds like a word you might hear in a science fiction story, there’s a good reason. And that reason is robots.

A robotic rover armed with various sensors will travel from chamber to chamber to measure and record plant performance under different environmental conditions. Automatic sliding doors installed in each growth chamber will allow the rover to enter each chamber.

Plants can’t be grown under different environmental conditions in other commercially available facilities. And current facilities require the plants to be transported to a central location on conveyer belts where they are examined by sensors. The Enviratron won’t move the plants for screening, an important feature that will allow researchers to gather more reliable data, said Stephen Howell, a professor of genetics, development and cell biology who’s working on the project.

“The growth of plants is sensitive to movement,” Howell said. “Trees on a coastline, for instance, grow thicker trunks because the winds batter them around. With the system we’re developing, the plants never leave the chambers, so there are fewer variables introduced during their development.”

Lie Tang, an associate professor of agricultural and biosystems engineering, is leading the effort to develop the robotics necessary for such a complex project. Tang said the mobility of the robotic rover presents advantages beyond eliminating the need to move the plants.

“You can’t guarantee consistent and trustworthy readings with stationary sensors such as spectral sensors when using a conveyor belt system,” Tang said. “But the robotic manipulator on the rover has the capability of automatically moving the sensors into the optimal positions to get the best readings. So, ultimately the robot will allow us to acquire high-quality data.”

A robotic arm will protrude from the rover, equipped with a suite of sensors that can take photographic, holographic, spectroscopic and thermographic readings, to name just a few. But writing the algorithms to control the robotic system and make sense of the reams of data the rover will produce will take substantial time and effort, Tang said.

Howell said cash crops will be the most likely plants to be studied in the growth chambers.

“We hope the crops commonly grown in Iowa – corn, soybeans and biomass crops – will be the main targets for the research,” he said.  “We’ll be able to control the environment and capture a lot of data particularly during the early stages of the plant’s development, which are some of the most critical stages of development.”

Iowa State University faculty members are developing a new facility that will utilize a specially designed robot to gather unprecedented amounts of data on the growth of plants under different environmental conditions. The facility won’t require plants to be moved for data gathering, a major advantage over existing plant-growth facilities.

“The growth of plants is sensitive to movement. Trees on a coastline, for instance, grow thicker trunks because the winds batter them around. With the system we’re developing, the plants never leave the chambers, so there are fewer variables introduced during their development.”