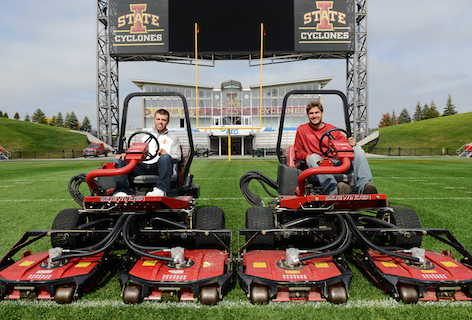 Joshua Lenz and Kevin Hansen will tend turf in London for the NFL. Larger photo by Amy Vinchattle.

AMES, Iowa -- Sometimes, when what-you-know intersects with who-you-know, something extraordinary can occur. At least that's how it happened for two Iowa State University graduate students.

Kevin Hansen and Joshua Lenz study sports turf management in the horticulture department. Turf managers are the folks who keep the putting greens green and the yard lines aligned.

As undergraduates at Iowa State, Hansen and Lenz were chosen to intern on the turf crews at Super Bowl XLVII and XLVIII respectively. Besides preparing the fields and practice fields, painting logos on the fields and (in Lenz's case) removing snow, they networked and generally hung out with the top turf field managers from around the country.

Spending a week at ground zero of, arguably, the biggest sporting event of any given year was the most awesome experience a couple of sports nuts/turf majors could have. And yet, the awesomeness continues.

A couple of months ago, Lenz was talking to one of the aforementioned turf managers who told him about another exceptional opportunity: spend a couple of weeks in London preparing the Wembley Stadium field for NFL exhibition games. All expenses plus pay.


Since 2007, the NFL has hosted regular season games outside of the United States in the International Series at Wembley Stadium in London."Basically, he said, 'We have openings in London.' So we said we'd be interested," Lenz said.

"This is the first year the NFL has done three games there instead of two, so they needed more help," Hansen said. "We were in line for the job because we have experience working on the crew and know what's going on."


"It was a networking thing that worked out for us. They contacted us and asked," Hansen said. "And who wouldn't want to go to London?"And they've both stayed in contact with the turf management gurus they met during their Super Bowl internships.

While they are thrilled to go to London, they are, after all, really into turf. And Wembley is, after all, natural grass. That's a whole different ball game.

"It will be exciting for us because both of our Super Bowls were on artificial turf," Lenz said.

Hansen especially looks forward to experiencing the rapid "changeover" between games that requires a quick switching out of the team logos on the field.

"I don't think there's time for maintenance like aerating and top dressing between the games, so painting logos will be a big part of what we do," Hansen said

And watching the sold-out games from the sidelines at the world famous 90,000-seat stadium across the pond might even beat — or at least tie — their Super Bowl experiences.

Lenz and Hansen credit much of their success in garnering world-class turf gigs to Iowa State turf manager Tim Van Loo. They have worked under him on the turf crew at Jack Trice Stadium as undergraduates and now for 30 hours per week as graduate assistants.

"He has prepared us and other ISU students for careers after college," Lenz said.

Turf management graduate students Kevin Hansen and Joshua Lenz will spend 12 days in London preparing the field of Wembley Stadium for games in the NFL International Series. They were contacted by turf managers they had worked with during internships at the Super Bowl.

"It was a networking thing that worked out for us." 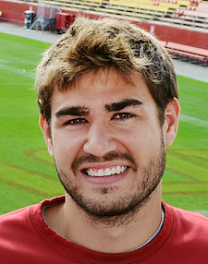 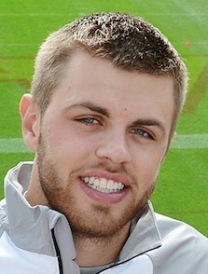