AMES, Iowa – They say space is the final frontier, but it’s just another day at the office at Iowa State University’s Virtual Reality Applications Center.

Instead of boldly going in a starship capable of warp speeds, Nir Keren, an associate professor of agricultural and biosystems engineering, can reach the International Space Station virtually.

With the aid of a pair of 3-D goggles and the C6, a cube-shaped room in Howe Hall that measures 10 feet to a side and is equipped with a highly advanced projection system, visitors can explore realistic virtual simulations of an Afghan village, a burning house or the International Space Station.

Keren and his colleague Warren Franke, a professor of kinesiology, use the C6 to test the decision-making process of humans in stressful situations. Most recently, the research team designed the mock-up of the space station as part of a weeklong spaceflight operations workshop for aerospace engineering students in August.

The students entered the C6 and were allowed to explore the International Space Station. Then things took a turn for the worse. Smoke started to fill the station. The students had to locate the source of the fire and put it out. It’s the sort of worst-case scenario that Keren and Franke love to study.

“You have to put the fire out because there’s nowhere else to go on the space station,” Keren said. “You can’t just walk outside to safety. The students diligently studied the safety procedures in case of a fire on the space station, but the stress of actually facing the situation definitely affected their performance.”

How realistic is the experience? Keren asked Clayton Anderson, a distinguished faculty fellow in aerospace engineering and former astronaut who spent months on the International Space Station, to give the C6 simulation a try.

“The ISU C6 virtual reality simulation does an excellent job of replicating the International Space Station interior,” he said.

And the fire scenario provides students with valuable training and experience, he said.

“Being able to expose ISU students to what the simulator has to offer, especially as it relates to responding to ISS on-board fire scenarios, is a huge boon to the aerospace engineering program,” Anderson said. “Teaching our students to think more operationally is key in our forward goal of providing excellent potential hires for commercial space companies.” 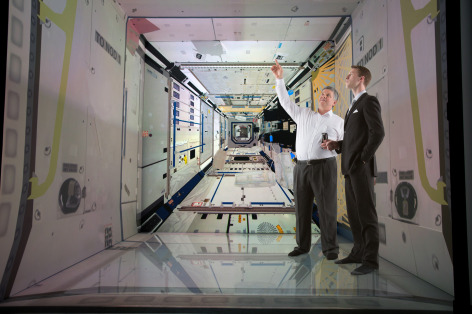 The interface between humans and computers

The Virtual Reality Applications Center at Iowa State is an interdisciplinary research initiative that explores innovative ways for humans to interface with computers. One of the center’s crown jewels is the C6, a 3-D and fully immersive virtual reality system.

Keren’s team based its simulation on basic 3-D models of the space station provided by NASA and then rendered them in VirtuTrace, a computer engine created by Keren and Franke’s research team. Twenty-four projectors powered by 48 computers installed around the C6 show images on the walls, ceiling and floor of the room. The goggles make everything appear in three dimensions. When someone enters the C6, an array of sensors tracks the subject’s movement and adjusts the virtual environment accordingly.

Kevin Godby, a graduate assistant who led the team that programmed the latest version of VirtuTrace, is planning to use the space station simulation principles to study how humans perceive gravity. Godby said scientists have an incomplete understanding of how gravity works and an even shakier grasp on how it affects the way humans perceive their surroundings.

“The question I’m trying to answer is can we develop technology to accelerate skill acquisition and enhance training practices in the C6 to reduce the preparation time without sacrificing any operational readiness,” he said.

The research team has also programmed a simulation of a burning house that’s been used to train real firefighters. The team uses the simulation to piece together how firefighters of varying levels of experience make decisions under stressful situations. They’re also preparing scenarios that could yield similar insights for soldiers in combat situations.

“The simulations can make you sweat or give you chills, and your heart rate goes up,” Franke said. “It’s totally immersive.”

A virtual simulation of the International Space Station takes Iowa State University faculty and students out of this world to test how humans make decisions in stressful situations. The simulation also helps to train students in space-flight operations.

“The simulations can make you sweat or give you chills, and your heart rate goes up. It’s totally immersive.”