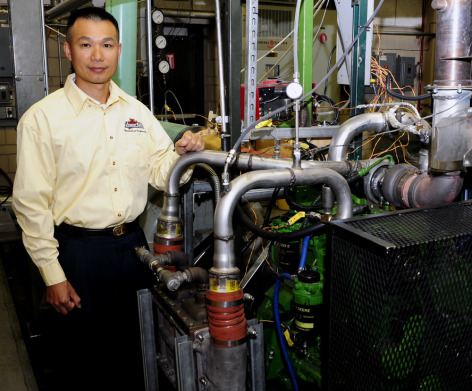 AMES, Iowa – The compression-ignition, internal-combustion engine goes all the way back to the 1890s and the work of one Rudolf Diesel. All these decades later, engineers have developed advanced diesels featuring higher pressures, lighter parts, cleaner emissions and better efficiencies. Turbo diesels have even won the 24 Hours of Le Mans sports car race.

So, engineers have it all figured out? There’s not much they don’t know about making a diesel go? 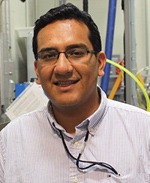 Kong is part of an engine research collaboration led by Luis Bravo, a mechanical engineer with the U.S. Army Research Laboratory at the Aberdeen Proving Ground in Maryland. The collaboration recently won a five-year grant of $500,000 and one billion supercomputer hours to study diesel engines. (Kong’s share of the funding is $250,000 to support the project plus the work of a doctoral student.)

The grant is one of the Frontier Projects of the Department of Defense High Performance Computing Modernization Program. The projects are all about using multidisciplinary teams, supercomputing and physics-based modeling to solve defense problems.

In this case, the Defense Department wants better performance, fuel economy and power from its huge fleet of vehicles, including air and ground combat machines.

The researchers will use the grant to model the fundamental physics of fuel breaking into fine droplets (called atomization) and spraying into diesel engines at pressures of 3,000 atmospheres and speeds faster than 800 meters per second. The researchers want their models to show exactly what happens to the diesel droplets as they mix with air or crash into pistons.

“There are several things currently not understood about liquid fuel atomization, vaporization and two-phase flow turbulence inside the diesel engine,” Bravo said. “We’re taking a first-principles approach and looking at the various instability mechanisms that control atomization to eventually optimize that process.”

Bravo will lead studies of the fuel spray atomization and mixing. Kong will lead studies of fuel droplets interacting with pistons. Both projects will work with the Army Research Lab’s Spray and Combustion Laboratory and Chol-Bum “Mike” Kweon, the lab’s engine team leader.

Using a high-fidelity technique called direct numerical simulations, “We’ll look at the behavior of individual drops,” Kong said. “What happens when high-velocity drops impinge on the surface of a piston? Do they vaporize or break into smaller drops? Or do they form a liquid film?”

Creating an accurate model of fuel spray inside an engine cylinder requires incredible computing power. Kong said his research group is likely to use 4,000 processors simultaneously and may run its calculations on up to 10,000 processors at a time.

Kong said the resulting data should lead to better predictions of engine performance and could replace the simplified models used to design engines. More precise physics could ultimately lead to new and better engines.

“We’re conducting fundamental research to provide the knowledge that will cut down the costs of running these engines and increase their lives,” Bravo said.

Running an engine, of course, doesn’t stop with spraying fuel. There’s also combustion. Kong said there’s still a lot to learn about that, too.

“The next step,” he said, “is to look at the fundamental combustion chemistry.”

Iowa State University's Song-Charng Kong is working with engineers at the U.S. Army Research Laboratory to study the fundamental physics of fuel spraying into diesel engines. Understanding the fundamentals should lead to better predictions of engine performance and could lead to better fuel economy and power. The Defense Department is supporting the work with a five-year grant of $500,000 and one billion supercomputer hours.

“We still need to make diesel engines more durable, more reliable and more efficient. That’s because we won’t get away from internal combustion engines anytime soon.”