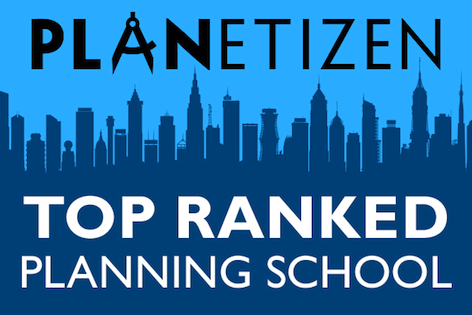 Planetizen is considered the leading online network for the urban planning, design and development community. Produced every three years, the “Planetizen Guide to Graduate Urban Planning Programs” provides the only comprehensive rankings of graduate urban planning programs in the United States.

For 2015, Iowa State University is ranked fourth in the nation among programs that do not grant a doctoral degree in planning. This is up from 13th place in 2012. There are 73 master’s programs accredited by the Planning Accreditation Board of the American Institute of Certified Planners and the Association of Collegiate Schools of Planning.

Iowa State’s program also ranked seventh overall among all Midwestern graduate planning programs, including those that offer doctoral degrees. Iowa State ranked sixth in this category in 2012 and 10th in 2009.

In an additional ranking this year, Iowa State was rated fifth among the “top small programs” based on enrollment.

Planetizen’s ranking system is based on an opinion survey of planning educators and detailed statistical data collected from the programs themselves. The opinions of educators about a college or university where the educator was currently employed were not included in the ranking, and other relationships between educators and the programs being rated were weighted to account for bias. In the statistical analysis, completeness of responses also was considered.

Iowa State’s accredited Master of Community and Regional Planning (MCRP) degree program is a part of the College of Design.

Planetizen, the leading online network for the urban planning, design and development community, ranked Iowa State’s graduate program in community and regional planning fourth in the nation among programs that do not grant a doctoral degree in planning.