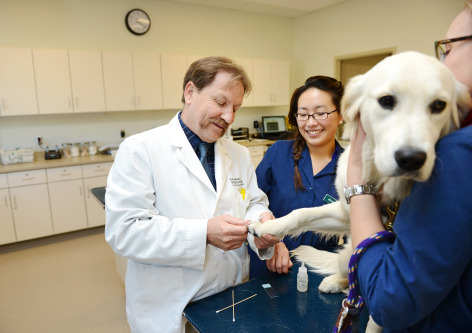 AMES, Iowa – If your dog suffers from itchy skin, he’s probably the person to see.

James Noxon, a professor of veterinary clinical sciences at Iowa State University, specializes in skin and ear problems in small animals. He spends much of his time in the gleaming dermatology exam rooms at the newly renovated Lloyd Veterinary Medical Center at Iowa State.

“I like to think these facilities might be the best in the world,” he said on a recent morning while giving a tour of the exam rooms. “With our facilities and expertise, we’re one of a very few hospitals that are capable of doing some of the procedures that we do here at ISU.”

The dermatology exam rooms come equipped with tables that fold out from the wall to accommodate larger dogs. Much of the equipment connects to a camera system that allows any lab results to be displayed in real-time on a television monitor for teaching purposes.

For itchy pups, the dermatology suites are the place to be, Noxon said.

And for Noxon, who grew up in a family of teachers, the setup is ideal for merging two of his greatest passions:  easing the discomfort of beloved pets and teaching the next generation of veterinarians.

“One of the things I try to get across to students is that veterinary medicine is fun,” he said. “If you’re not truly enjoying it, it’s probably not the right job for you.”

It’s a sentiment that may sound strange from someone who happened into veterinary science almost on accident.

Noxon was born in Waverly but spent most of his childhood in Colorado Springs, Colorado. He discovered an interest in science in school, and, by the time he left to attend college at Colorado State, he thought he wanted to study engineering.

That is, until he got on campus and discovered that the line to sign up for engineering courses was way too long. Rather than stand in line all day, Noxon saw that the line for pre-veterinary courses was much shorter.

“There were only a couple of people in the line, and it was a lot of the same courses that you would take for engineering,” he said with a grin. “So I made a choice to save some time, and it turns out it was the right fit.”

After practicing as a veterinarian for several years in Denver, Noxon went back for more training in dermatology and eventually decided he wanted to teach. The news came as no surprise to his parents, who were both music teachers.

“My mom said she always knew I’d go back to teach,” he said. “She said it’s in my blood. I love interacting with students and watching them grow as veterinarians.”

But it wasn’t just his parents’ love of teaching that rubbed off on him. Their musical background has also informed much of his life. For decades, Noxon has spent many of his weekends plying the boards as a drummer in rock ‘n’ roll bands.

During college, he made weekly trips between Fort Collins, where he went to school, and Boulder, where he and a few buddies would play rock covers in bars or at parties. He used the extra money from the gigs to help pay for veterinary school.

Today, Noxon batters the kit in the Box Brothers Band, a five-piece combo that plays regularly around central Iowa. 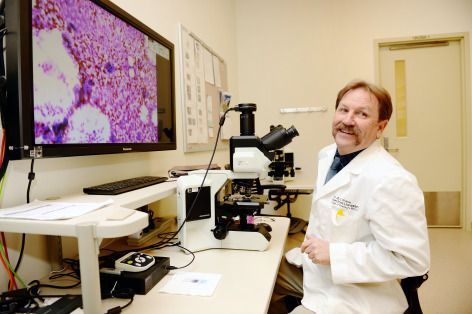 Much of the equipment in the dermatology exam rooms at the newly renovated Lloyd Veterinary Medical Center connects to a camera system that allows lab results to be displayed on television monitors. Noxon says its ideal for teaching veterinary students. Photo by Amy Vinchattle. Larger image.

A life in science, inspired by mentors

Noxon came to Iowa State in 1982 and established himself as a leading veterinarian in animal dermatology and ear ailments. He spends most of his time treating animals that have itchy responses to allergies, infections and parasites.

He also teaches courses on dermatology and internal medicine for third-year veterinary students. He said he delights in reconnecting with students he once taught after they’ve established themselves in the profession.

“I speak at several veterinary meetings every year, and I always run into an Iowa Stater,” Noxon said. “Veterinary medicine is a small world in many ways, and I love to see former students becoming leaders in their specialties and practices.”

Relationships with mentors can make a huge difference for students, especially in science-heavy disciplines, he said. His eighth-grade science teacher, Mrs. Kaufmann, stoked the interest in biology that would eventually lead him to become a veterinarian.

Years later, after he’d started his career, Noxon tracked Mrs. Kaufmann down and thanked her.

“I told her this was because of her, the way she inspired me to pursue science. We both started crying,” he said. “Mentors are so important in science.”

For this Iowa State veterinarian, teaching is in the blood.

“One of the things I try to get across to students is that veterinary medicine is fun. If you’re not truly enjoying it, it’s probably not the right job for you.”