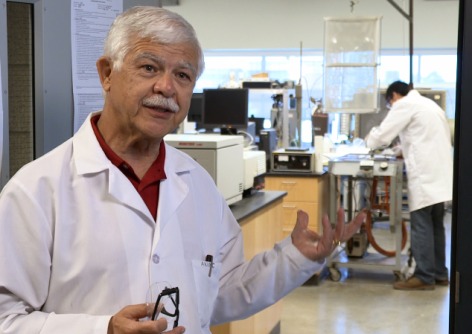 Mufit Akinc is leading a research effort to find and develop better insulation materials for buildings, appliances and other heating and cooling applications. Larger photo. Photo by the Iowa Energy Center.

AMES, Iowa – Mufit Akinc, who has a series of patent plaques hanging high on his office wall, knows all about the challenges of moving inventions out of the lab. But he’s determined to see one of his latest projects make it all the way to the marketplace where it can save energy and money.

Akinc, a professor of materials science and engineering at Iowa State University and the U.S. Department of Energy’s Ames Laboratory, is working to develop next-generation insulation materials for freezers, refrigerated trucks, buildings and other heating and cooling applications.

“This study will contribute directly to energy savings in Iowa and beyond,” Akinc wrote in a project summary.

The idea is to replace traditional insulating materials such as foam, fiberglass and synthetic silica with better materials. Akinc figures the improvements could lead to hundreds of millions of dollars in energy savings.

Back in his Hoover Hall lab, Akinc and graduate students Landi Zhong and Boyce Chang are working with the support of a two-year, $76,960 grant from the Iowa Energy Center. Mark Petri, director of the Energy Center, said the grant is part of the center’s new effort to help Iowa researchers compete for much larger research grants.

“The Iowa Energy Center is funded by the state of Iowa to support economic development through advances in renewable energy and energy efficiency,” Petri said. “Anything we can do to improve thermal insulation of buildings would go far to improve energy conservation in the United States.”

Akinc and his students have focused their attention on vacuum insulation panels. The panels are just an inch or so thick and filled with an insulating powder that’s vacuum sealed inside a foil cover. The vacuum enhances the insulating properties of the powder by eliminating the air molecules that can transfer heat. That’s how an inch-thick panel can provide as much insulating power as 10 inches of foam.

Akinc said the most common powder inside the panels is fumed silica, a synthetic nano-sized particle made from sand. But it’s expensive to make. And that makes the panels pricey for some applications, especially insulating homes and buildings.

“The insulation industry is very cost-conscious and competitive,” Akinc said. “Right now the issue is the cost.”

That has Akinc and his research group studying the porosity, surface area, density and other characteristics of low-cost alternatives, including glass fiber, fly ash, glass bubbles and diatomite.

The most promising material so far is diatomite, the fossilized remains of single-celled algae called diatoms. Diatoms have silica cell walls and grow just about anywhere there is water and sunshine. The skeletons they leave behind create diatomite. It’s inexpensive and filled with nanopores, just the material Akinc has been working to find.

He’ll soon be studying the material with an even bigger research team. The Iowa Energy Center has awarded another $20,000 to support the work of two more Iowa State researchers, Ulrike Passe, an associate professor of architecture, and Ganesh Balasubramanian, an assistant professor of mechanical engineering. They’ll collect data about the new material’s potential energy savings and manufacturability.

And so, when he gives presentations about his search for next-generation insulation materials, Akinc concludes, “Fumed silica can be replaced with other microporous materials.”

“We have very promising initial results,” he said. “Now I want to develop something that will attract the attention of people who can do this on a larger scale.” 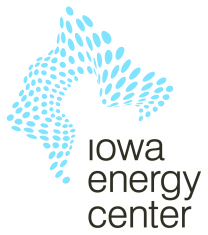 Mufit Akinc says filling vacuum insulation panels with new, low-cost materials could produce hundreds of millions of dollars in energy savings. And so he's leading an effort to search for insulating materials that could one day make it to the marketplace. The work is supported by research grants from the Iowa Energy Center.

“This study will contribute directly to energy savings in Iowa and beyond."

Mufit Akinc, a professor of materials science and engineering at Iowa State University and the U.S. Department of Energy’s Ames Laboratory

“The Iowa Energy Center is funded by the state of Iowa to support economic development through advances in renewable energy and energy efficiency. Anything we can do to improve thermal insulation of buildings would go far to improve energy conservation in the United States.”