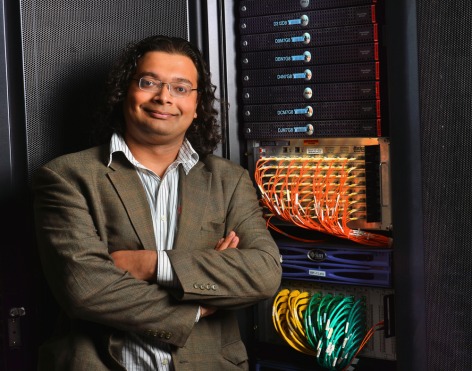 AMES, Iowa – Baskar Ganapathysubramanian spelled out a major goal of his work on the title page of a conference presentation: “Revolutionizing Science through Simulation.”

Baskar, an associate professor of mechanical engineering, and the researchers in his group are serious about that.

They’re confident they have developed the tools and the methods to mathematically and computationally simulate problems across disciplines, literally exploring millions and millions of variables, before settling on the most promising answers for further study.

“This is better science at a faster rate,” Baskar said during a recent conversation on the third floor of Iowa State University’s Lab of Mechanics, home to his Computational Physics and Mechanics Laboratory. “This enables us to quickly explore so many different scenarios.”

It doesn’t matter if the scenarios relate to solar cells, heating and cooling systems, wind energy or plant growth. Baskar says there are high performance computing tools that can model these scenarios and find answers.

“We’re a curiosity-driven research group,” he said. “We find science problems and use our methods to attack the problem.”

“We could have done this,” said Thomas Lubberstedt, an Iowa State professor and the K. J. Frey Chair in Agronomy. “But we would have recorded fewer traits and students would have had to spend much more time measuring rather than analyzing.

“Automatization of this phenotyping enabled evaluation of hundreds or even thousands of lines, as needed for genome-wide association analyses.”

Baskar, who’s 32 and from Hyderabad in south-central India, remembers being a “why kid” – “Why does this work? Why does this happen?”

And there were books.

“I had access to a lot of books,” Baskar said. “I was a voracious reader.”

His questions and his reading led him to the Indian Institute of Technology Madras where he studied mechanical engineering. Then he followed his brother to Cornell University in Ithaca, N.Y., to study mechanical and aerospace engineering, earning a master’s degree in 2006 and a doctorate in 2008.

At Cornell, he joined a computational mathematics research group. His projects included studying how molten silicon solidifies in space (zero gravity produces defect-free silicon) and how to account for uncertainty in complex systems. A major tool for those studies was high performance computing.

“The computer gets numbers and we get insights out of the numbers,” Baskar said. “It can be so easy to explore nature from a computer.”

Even though he talks a lot about working with math and computers, Baskar said mechanical engineering is the right field for him.

Setting up shop at ISU

Baskar began his Iowa State career in 2008. He had talked to other universities, but is glad he picked Iowa State.

A startup package goes a lot farther here. He can build and teach a sizable research group. It’s easy to meet faculty across the university. And he appreciates the chance to collaborate.

“I was fortunate to come here,” Baskar said. “There’s a wonderful group of experimental colleagues and mentors. They’re willing to test out a lot of my crazy hypotheses.”

One of those colleagues is Ulrike Passe, an Iowa State associate professor of architecture, who is working to make the heating and cooling systems of buildings more efficient and sustainable.

Baskar and his group have developed simulations of various duct configurations, have studied the best locations for temperature sensors and controls within a room and have even looked at the physics of the natural climate control within the beehive-shaped mud houses of Harran, Turkey.

Think about it, Baskar said: “One-third of all the energy we use is to heat and cool buildings. If we can improve the efficiency of that by 1 percent, we can save $1 billion or more every year.”

Passe says architects have a basic understanding of the physics of heating and cooling, but they’re not the ones to break heat transfer into math calculations and computer algorithms.

“We can use that science knowledge and work to turn it into design tools for architects,” she said.

And then she described what it’s like to work with Baskar and his group: He’s good at explaining what he does. He can listen to collaborators and develop or apply the simulation tools they need. He can help collaborators visualize complex sets of data. And he’s not afraid to cross disciplines.

“Baskar is very creative,” she said. “He’s a fantastic collaborator. I’ve learned a lot from him.”

Whether it's research related to plant growth or heating and cooling systems, Baskar Ganapathysubramanian and his research group have the tools to mathematically and computationally simulate problems, explore variables and find the most promising answers for further study. Says Baskar: "This is better science at a faster rate."

“We’re a curiosity-driven research group. We find science problems and use our methods to attack the problem.”

Baskar credits the success of his research to the people in his group, saying, “They work extremely hard on these problems.” He also says he is thankful to his wife -- Priyanka Jayashankar, an adjunct assistant professor of management and an affiliate conducting research for the Leopold Center for Sustainable Agriculture -- for her encouragement and support, as well as for getting him to think about sustainable agriculture and the problem of sustainably feeding billions of people.