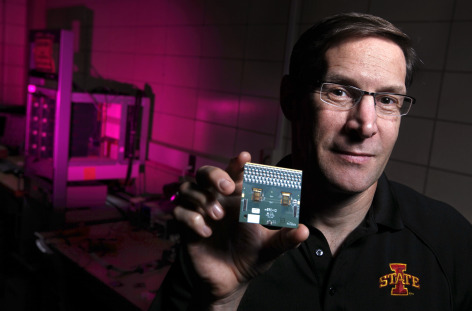 Iowa State's John Lajoie holds an electronic read-out card tested in an Iowa State lab. The card will be part of a detector extension that physicists are adding to the PHENIX Experiment in New York. Larger image. Photo by Christopher Gannon.

AMES, Iowa – John Lajoie, surrounded in his office by Star Trek posters and a few space hero action figures, recently made the case for nuclear physics research and the multi-million-dollar experiments and huge collaborations it takes to make discoveries.

Of course, said the Iowa State University professor of physics and astronomy, big physics experiments such as PHENIX at the U.S. Department of Energy’s Brookhaven National Laboratory in Upton, New York, will tell us about the building blocks of the universe. In the case of PHENIX, physicists are learning about the structure, characteristics and energy inside each and every proton.

“What we’re doing is studying what makes up the matter in the universe that we can see,” said Lajoie. (It sounds French, Laj-wah.)

But there’s a lot more that can come from colliding protons and gold nuclei then studying the particles that fly off, he said.

The PHENIX Experiment, for example, uses these collisions to learn about the strong nuclear force that binds the three quarks inside a proton and the protons and neutrons in the nuclei of atoms. Lajoie said understanding and harnessing that force could revolutionize our lives, just like understanding the electromagnetic force harnessed electricity and, eventually, put smart phones in our pockets.

“We mastered one of the forces of nature and put it to use,” Lajoie said. “Now, with the strong force, we’re still very much at the beginning, but there is enormous potential.”

Over time, as experiments produce more data and better understandings, Lajoie said the scientific yield could include new technologies. Researchers, for example, could engineer super-heavy nuclei that could be used for the rugged spacecraft shields required for long-distance space travel. 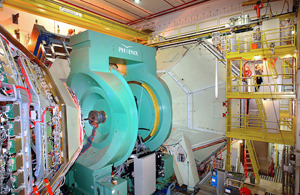 The PHENIX Detector is a massive machine. Larger image. Photo courtesy of the U.S. Department of Energy’s Brookhaven National Laboratory.

Lajoie is a deputy spokesman for PHENIX, the Pioneering High Energy Nuclear Interaction eXperiment based at Brookhaven on New York’s Long Island. The collaboration includes some 500 scientists and engineers working with funding from agencies in a dozen countries.

The PHENIX detector is one of four detectors located around the 2.4-mile, underground ring of the Relativistic Heavy Ion Collider. The collider sends two beams of protons or heavy gold ions (they’re atoms stripped of their electrons) around the ring in opposite directions. It accelerates them to nearly the speed of light and then smashes them together. The detector – it’s a huge machine: 4,000 tons, 40 feet wide, four stories high – records and tracks the various particles that fly off the collisions.

The collisions of gold nuclei create temperatures of about 4 trillion degrees Celsius, 80 times hotter than the center of the sun. That’s hot enough to break up the ions’ neutrons and protons, releasing the subatomic quarks and gluons inside. You can think of gluons as the glue that binds the quarks inside protons and neutrons. The gluons are considered exchange particles that transmit the strong nuclear force.

Physicists say the conditions have re-created the quark-gluon plasma that existed about a millionth of a second after the Big Bang. Physicists are working to study and characterize that new state of matter. So far, they’ve found the plasma behaves more like a fluid than a hot gas.

Lajoie said scientists were stunned to discover that the quark-gluon fluid is almost perfect – it flows like a liquid without almost no viscosity.

Lajoie, who has his doctorate from Yale and an undergraduate physics degree from Iowa State, has been part of the PHENIX collaboration since joining the Iowa State faculty in 1997. Other Iowa State physicists involved in PHENIX are Craig Ogilvie and Marzia Rosati, professors; John Hill, professor emeritus; Alexandre Lebedev, assistant scientist; plus Nicole Apadula and Sarah Campbell, postdoctoral research associates. Nathan Neihart, an Iowa State associate professor of electrical and computer engineering, has also contributed to the PHENIX project.

Lately, the researchers have been busy preparing and testing an extension to one of the PHENIX sub-detectors. They’re adding to the forward silicon detector that’s close to the beams of colliding protons and ions. The new MPC-EX equipment is expected to start recording collision data this month.

But first, there are startup issues to address. Lajoie said he spent a recent workday helping to solve some cooling issues with the new equipment.

“We’re scrambling to redo the cooling design,” he said. “This is a complicated device. And every device like this is an R&D project on its own.”

A primary goal of all the researching and developing, colliding and analyzing, is simply “to understand the proton,” Lajoie said. “It’s a really complicated thing.”

One area for further study, for example, is proton spin, also known as angular momentum. Spin is a constant characteristic of subatomic particles; it describes the direction a particle spins around an axis as it travels. Spin also contributes to a particle’s magnetic properties.

Since experiments in the 1980s, physicists have known that the three quarks that make up a proton could only account for about 30 percent of its spin. But what was the source of the rest?

PHENIX and the complimentary STAR experiment at Brookhaven have recorded enough data from unique experiments that control the spin alignments of colliding protons to discover that gluons are responsible for an additional 20 to 30 percent of proton spin.

Lajoie said more and more discoveries about the strong nuclear force could one day make a difference in our lives. After all, he said when making the case for nuclear physics, there is precedent: “The more we mastered the electromagnetic force, the more we could turn it into technology to make life better for everyone. We’re just beginning to understand the strong nuclear force, but who knows what the future holds?”

Iowa State's John Lajoie is happy to make the case for nuclear physics and the big experiments it takes to make discoveries. He's been part of the proton- and nuclei-smashing PHENIX Experiment at Brookhaven National Laboratory since 1997. He's now busy developing an extension to one of the experiment's sub-detectors. PHENIX is all about helping researchers understand a new state of matter and the fundamental bits and forces of nature.

A primary goal of all the researching and developing, colliding and analyzing, is simply “to understand the proton. It’s a really complicated thing.”

“The more we mastered the electromagnetic force, the more we could turn it into technology to make life better for everyone. We’re just beginning to understand the strong nuclear force, but who knows what the future holds?”