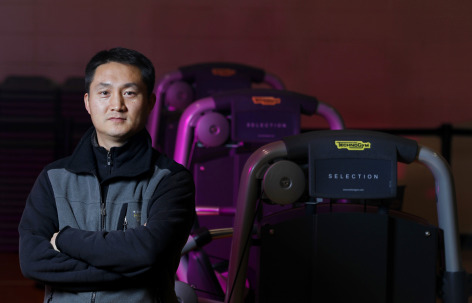 DC Lee used to spend hours in the gym in his quest to become Mr. Korea. Today, he's still in the gym, but with a different goal. Photo by Christopher Gannon (Larger image)

This is the latest entry in a series of articles telling the personal stories of Iowa State University faculty and scientists whose big ideas are changing the world for the better.

AMES, Iowa – Rows of high-tech treadmills and weight machines line the west end of the Exercise Clinic at Iowa State University. It may look like any other gym, but this is not your typical workout equipment.

A special key, programmed with an individual’s workout regimen, is required to activate each machine. And the key tracks everything from the number of reps completed on the squat machine to the speed, distance and time spent on the treadmill.

This gym – half a world away from the gym where DC Lee first worked as a health coach – is home to his latest round of research. The assistant professor of kinesiology garnered national attention last fall for his study that found running as little as 5 or 10 minutes a day can help people live longer. The study’s impact definitely exceeded his expectations. But Lee wanted to shift his research focus from running to an area in which he has a unique perspective – strength training.

The specialized fitness equipment at the Exercise Clinic is a great tool for Lee’s work. It allows him to program workouts and track progress throughout a research trial, eliminating any concern about the accuracy of self-reports. Study participants are randomly assigned to different workout programs consisting of cardio and strength training. Lee wants to identify the benefits of strength training to improve overall health, prevent illness and improve the quality of life for older adults.

Lee’s interest in strength training is fueled by the potential health benefits, but more so by his own experience as a weightlifter. Long before he ever picked up a book to pursue a career in academic research, he was lifting three times his body weight in hopes of winning the title of Mr. Korea.

The pursuit of a dream or any ambitious goal often starts in the most unlikely places. For Lee, his goal of Mr. Korea, even though it wasn’t so clearly defined at the time, can be traced in part to hours spent on overnight guard duty in the military.

All Korean men are required to complete two years of military service. Lee served his time as a tank driver, a position he jokingly says he was specially qualified for because of his limited height. Looking back on his military experience, Lee focuses on the positives.

“It’s the core of your life, in your early 20s. You have the most passion and energy and you use the core of your lifetime in the military. You cannot do anything else,” Lee said. “It helps somehow. You learn about controlling your lifestyle. You think about your future and past. When you’re standing on guard duty for an hour and a half, every day and every night, you have to think something, right?”

Along with his thoughts on what he wanted to do with his life, Lee developed a level of discipline in the military that would serve him well.

After completing his military service, Lee planned to return to Hanyang University in South Korea, where he started taking classes after high school. He would eventually earn a degree in German language and literature, but first he had another goal in mind. Instead of returning to the classroom, Lee decided to get back in the gym and start lifting again – an interest he developed in high school sparked by a long-time friend.

But this time was different – it was more than just an interest. Lee spent hours every day working out at the gym. He picked up part-time jobs so he could afford to order different supplements from the U.S. that he read about in bodybuilding magazines. His interest quickly spiraled into a lifestyle, and Lee postponed his return to college to focus 100 percent on bodybuilding.

The discipline he learned in the military influenced his commitment to the sport. Lee gave up nights out with friends drinking beer and eating pizza for what he calls a “monk-like lifestyle.” To build the muscle mass he desired, Lee ate five or six meals a day, often getting up in the middle of the night to eat. His diet centered strictly on protein to build muscle.

It was an extreme lifestyle, but what he considers one of the happiest times of his life. Lee knew this is what he had to do if he wanted to achieve his dream of becoming Mr. Korea.

“When you have a dream and you see yourself getting a step closer every day, that is happiness,” he said.

Not all dreams come true

Months of training turned into years in the gym, with various competitions along the way. Lee gained more than 70 pounds in muscle mass. Having started out bench pressing around 110 pounds and deadlifting between 130 to 150 pounds, Lee built up to more than 300 on the bench and nearly 600 deadlift. As the Mr. Korea competition approached, Lee was projected to finish in the top three.

Just as dreams begin in unexpected ways, an unforeseen twist of fate can bring them to a screeching halt. There is an obvious risk of injury for bodybuilders – that Lee was well aware of – when lifting that much weight. Two months before the competition, a major back injury forced Lee to put his dream on hold.

The pain from his injury was so intense that Lee could hardly sit. Unable to afford surgery to repair the injury, Lee struggled to figure out his future. He considered becoming a reporter, even traveling to Canada to study English. But in the back of his mind, Lee still held onto the belief that he could return to the gym and take another shot at Mr. Korea.

Eventually, Lee did get back in the gym. A friend encouraged him to return to Korea and helped Lee get a job as a gym manager. Reality was starting to sink in.

“I held on to the dream for a few years after my injury, but I couldn’t restart my career after such a serious injury,” Lee said. “My goal was Mr. Korea, that was the ultimate goal. It was really sad and a hard time for me.”

Some people might let such a major setback derail their careers, but Lee saw it as an opportunity to use his expertise to help others. He enjoyed working with clients at the gym, helping them with their diet and exercise, but he wanted to do more and so he went back to school. Lee completed his master’s and Ph.D. in exercise physiology and physical activity epidemiology before coming to the U.S. to do his postdoctoral research at the University of South Carolina.

Lee then joined the ISU Department of Kinesiology in the fall of 2012. He occasionally talks with his colleagues or students about that time in his life when “he was into weightlifting,” but he rarely refers to himself as a former bodybuilder. Lee’s not trying to hide the fact; it’s just that he was trained to let his body speak for itself and to never brag about how much weight he could lift.

Considering he no longer looks like a bodybuilder, it just doesn’t feel right for Lee to refer to himself as one. And the title of bodybuilder or Mr. Korea is no longer important. Lee is defines himself through the impact of his research.

“I don’t have that dream anymore, but I have other dreams as a researcher,” Lee said. “I still have the same goal to help people and promote their health, but on a larger scale and with a different approach.”

DC Lee’s interest in strength training is fueled by the potential health benefits, but more so by his own experience as a weightlifter. Long before he ever picked up a book to pursue a career in academic research, he was lifting three times his body weight in hopes of winning the title of Mr. Korea.

“When you have a dream and you see yourself getting a step closer every day, that is happiness.”