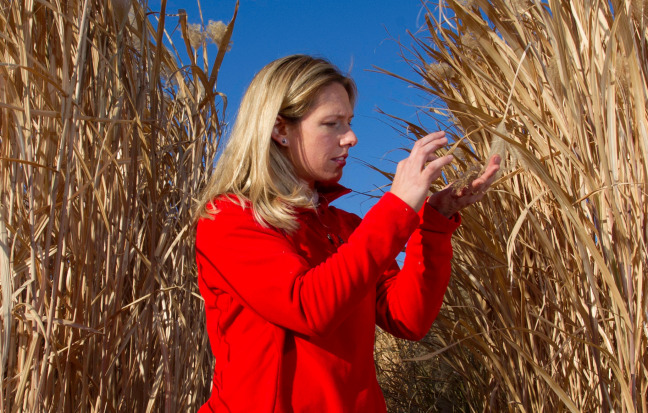 AMES, Iowa – “I want to save the world with giant grasses.”

It might sound a little outlandish, but there isn’t a trace of insincerity in her voice.  Spend a few minutes with Emily Heaton, an assistant professor of agronomy at Iowa State University, and you’ll see that statement isn’t as hyperbolic as it seems. She’s got a plan, and it calls for serious changes to Iowa’s landscape – both in a literal and an economic sense.

Heaton studies perennial grasses, or grasses that grow back year after year, to get a better handle on their environmental benefits. She said Iowa stands to gain much by replacing some of the acres currently devoted to corn and soybeans with tall grasses.

“More perennials in Iowa means more roots in the ground, which keeps soil and water and nutrients where they should be,” Heaton said.

She said planting perennial grasses on about 15 percent of the farmland in the state could lead to a 90 percent reduction in sediment losses and a fourfold increase in plant and animal diversity. So what’s not to love?

While there are many advantages to planting perennials, Heaton admits money isn’t one of them. That makes it a tough sell for farmers whose livelihoods depend on getting maximum production out of their land. But that might be changing.

Heaton is looking at ways to make perennial grasses profitable. Miscanthus, a huge grass that originates in Asia, can yield a surprising amount of biomass that can be used in energy production. She’s published studies indicating that a sterile hybrid of miscanthus would produce more biomass in Iowa’s climate than experts previously thought.

She knows her goal of transitioning 15 percent of Iowa farmland into perennials would be a heavy lift, but she says the benefits – a 50 percent reduction in water runoff and a steep drop in the loss of nitrates and phosphorous – would far exceed the cost.

Heaton grew up in Monticello, Illinois, just down the road from Urbana, the home of the University of Illinois. She developed an interest in conservation and environmental issues at an early age, sparked in large part by her father, a conservationist and intrepid farmer. Heaton tried her hand at working in a forest preserve, but the vast potential for large perennial grasses to protect the environment soon captured her imagination.

She went back to school at the University of Illinois where, as a Ph. D. student with plant biology and crop sciences professor Steve Long, she oversaw the first side-by-side trials of miscanthus and switchgrass in the United States.

“The project faced a lot of uncertainty at the beginning,” she said. “I didn’t know anything about miscanthus or how it would perform in the climate and soil of the Midwest. It could have been a total failure, for all I knew.”

It wasn’t a total failure, though. The huge grass performed well enough to inspire Heaton to continue studies on the plant.

She said that first blind leap fit well with the land-grant mission of schools like the University of Illinois and Iowa State.

“We had questions we wanted to answer, so we went out and found those answers,” she said. “Then we made that new knowledge available for people to advance even further.”

She joined the faculty at Iowa State in 2008 and has continued to explore the benefits of planting perennial grasses. Heaton credits the STRIPS project at Iowa State, which studies the effects of integrating restored prairie into cropland, as the basis and inspiration for much of her current research.

Something that doesn’t exist… yet

Heaton said some of her research involves laying the groundwork for a “perennial economy,” or a market in which there’s demand for the biomass produced from perennial grasses. Such a market doesn’t exist in the United States today in any meaningful capacity, but it may only be a matter of time before it does. Europe has been planting miscanthus as a crop since the 1980s to fuel power plants. And Heaton said research has shown that planting perennials can make economic sense as well as environmental sense.

She said over a million acres of Iowa cropland lose money every year. Hidden within large fields are patches of soil that produce lower yields than the surrounding acres, usually due to poor soil conditions, she said. The crops produced on those patches aren’t worth the time and expense to plant and cultivate them, so it might make more sense to plant prairie grasses there to reduce cost and increase environmental performance, she said. If the patches are big enough to harvest, high-yielding perennial grasses such as miscanthus could fit the bill. Switchgrass and prairie cordgrass also show promise, according to her research.

Heaton’s expertise played a pivotal role in a collaboration with the University of Iowa that began several years ago, when UI was looking for a source of biomass to cofire with coal to produce energy on campus. Heaton helped oversee the planting and harvesting of the sterile miscanthus hybrid on a combined 28 acres at two sites in eastern Iowa. The first biomass was harvested in 2013. An additional 200 acres will be planted in 2015 as the result of the collaboration between ISU researchers and the UI Office of Sustainability.

Heaton said projects like that form a foundation on which a larger perennial economy can be built.

“Iowa is in a unique position because of the opportunities for collaboration,” she said. “This project provides a solid, long-term market for miscanthus in Iowa. It puts us in a position to take the next step.”

She said diversity would also be important in a perennial economy. Think strips of lush prairie sprouting up on land only marginally suited for crops, providing a home to a vast array of plants, insects and animals. More habitat. Cleaner water. Preservation of topsoil.

The research already shows that it’s possible with perennial grasses. And, if Heaton’s vision holds true, perennials won’t just protect the environment. They may even be a viable source of profit.

She’s out to save the environment with giant grasses.

“More perennials in Iowa means more roots in the ground, which keeps soil and water and nutrients where they should be.” 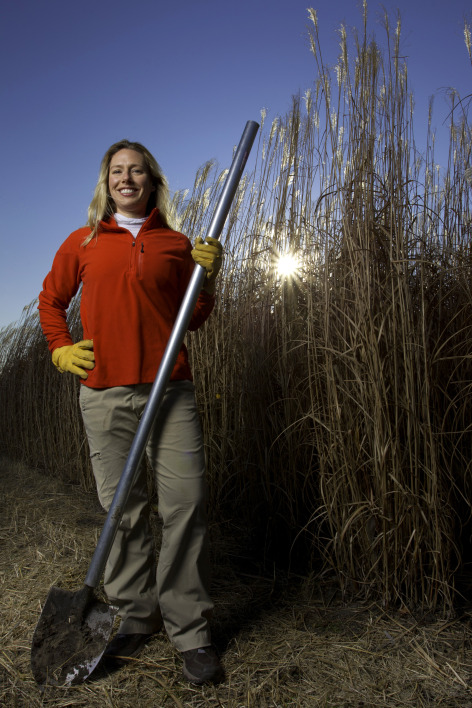