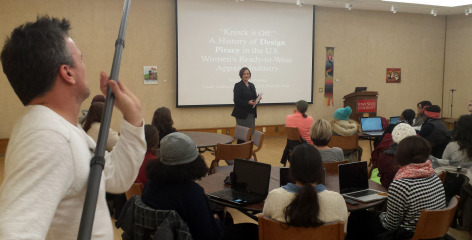 Sara Marcketti talks about attempts to control piracy in the fashion industry during her class lecture that will air on C-SPAN's American History TV.

AMES, Iowa – Imitation may be the sincerest form of flattery, but in the world of fashion it can be costly. Designers spend months creating the latest styles. But all too often a cheaper version of the design will end up in stores just days or weeks after a model debuts the look on the runway, says Sara Marcketti, an associate professor of apparel, events and hospitality management and associate director of the Center for Excellence in Learning and Teaching at Iowa State University.

Most consumers are unaware of design piracy and its impact on the fashion industry. The topic is the focus of Marcketti’s class lecture that will be featured C-SPAN’s American History TV. The segment will air at 7 p.m. and 11 p.m. on Saturday, Feb. 21. Marcketti says design piracy thrives because of consumer habits and the constant demand for new styles.

“Consumers desire newness in their clothing, but to get that newness, designers and manufacturers creatively and not so creatively borrow from pre-existing ideas and works. Since there is so much turn-over of apparel products and consumer demand for cheap goods, imitation thrives in the industry,” Marcketti said.

In her lecture, Marcketti discusses how the roles of women – including the shift from making their own clothes to shopping in department stores – have changed fashion throughout history. She also looks at past and current efforts, many of which have been unsuccessful, to control piracy.

“History has borne out the logistical concerns of determining the differences between an original, an adaptation, and a copy are difficult if not impossible to ferret out,” Marcketti said. “The fashion system thrives on copies and copies of copies.”

C-SPAN’s American History TV features event coverage, lectures and discussions with teachers and historians every weekend on C-SPAN 3. A preview of Marcketti’s lecture is available at: https://www.youtube.com/watch?v=DgirUiSKq8o&feature=youtu.be.

All lectures are also available as a podcast at: c-span.org/historypodcasts

All lectures are also available as a podcast at: c-span.org/historypodcasts - See more at: http://www.news.iastate.edu/news/2014/01/27/dobbscspan#sthash.8RLivH2z.dpuf
Loading...