Fagin will present "What was in the Water? Toxic Dumping in Toms River" at 7 p.m. Tuesday, March 3, in the Memorial Union Great Hall. His presentation is free and open to the public. Fagin also will hold an informal conversation with environmental and science writing students, "Researching and Reporting Complex Environmental Stories," at noon in the Memorial Union Pioneer Room.

Fagin's book, "Toms River: A Story of Science and Salvation," won the 2014 Pulitzer for General Nonfiction as well as the National Academies Science Book Award. The book weaves together investigative reporting, science and statistical analysis with historical research to tell the riveting story of a town's cancer epidemic linked to industrial pollution.Fagin

Fagin is professor of journalism at New York University and director of the program in science, health and environmental reporting. For 14 years, he was the environmental writer at Newsday. In 2003, his stories about cancer epidemiology won the Science Journalism Award of the American Association for the Advancement of Science and the Science-in-Society Award of the National Association of Science Writers. Fagin is a former president of the Society of Environmental Journalists. He is also the co-author of "Toxic Deception: How the Chemical Industry Manipulates Science, Bends the Law and Endangers Your Health."

As part of the "Environmental Imagination" series, Fagin's presentation is co-sponsored by the M.F.A. program in creative writing and environment; Writers' Guild of ISU; departments of English, History, and Ecology, Evolution and Organismal Biology; Henry A. Wallace Chair for Sustainable Agriculture; Greenlee School of Journalism and Communication and the Committee on Lectures, which is funded by the Government of the Student Body. 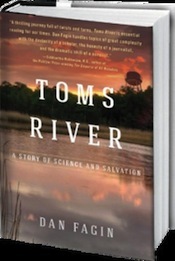 "What was in the Water? Toxic Dumping in Toms River"