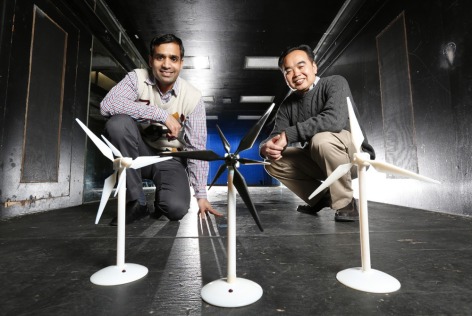 First, said the Iowa State University professor of aerospace engineering, check out the base of each blade. They’re big, round structural pieces. They’re not shaped like an airfoil. And so they don’t harvest any wind, reducing a turbine’s energy harvest by about 5 percent.

Second, the big blades disturb the wind, creating a wake behind them and reducing the energy harvest of any downwind turbines. Hu said a turbine sitting in the slipstream of another can lose 8 to 40 percent of its energy production, depending on conditions.

Those losses prompted Hu and Anupam Sharma, an Iowa State assistant professor of aerospace engineering, to look for a solution. Their data suggest they’ve found one.

Hu turned back to his wind turbine models: Look at these two, he said. See what we’ve done?

What they’ve done is add a smaller, secondary rotor. One model had three big blades and three mini-blades sprouting from the same hub. The other had a small, secondary rotor mounted in front of the big rotor, the two sets of blades separated by the nacelle that houses the generating machinery on top of the tower.

“To try to solve these problems, we put a small rotor on the turbine,” Hu said. “And we found that with two rotors on the same tower, you get more energy.”

Using lab tests and computer simulations, Hui and Sharma have found those extra blades can increase a wind farm’s energy harvest by 18 percent.

“These are fairly mature technologies we’re talking about – a 10 to 20 percent increase is a large change,” Sharma said.

The Iowa Energy Center awarded Hu and Sharma a one-year, $116,000 grant to launch their study of dual rotors. (The two won the energy center’s 2014 Renewable Energy Impact Award for the rotor project.) The National Science Foundation is supporting continued studies with a three-year, $330,000 grant.

Hu is using experiments in Iowa State’s Aerodynamic/Atmospheric Boundary Layer Wind and Gust Tunnel to study the dual-rotor idea. He’s measuring power outputs and wind loads. He’s also using technologies such as particle image velocimetry to measure and understand the flow physics of air as it passes through and behind a rotating turbine.

How, for example, is the wake distributed? Where are the whirling vortices? How could the wake be manipulated to pull down air and recharge the wind load?

Hu is being assisted by Wei Tian, a postdoctoral research associate, plus Zhenyu Wang and Anand Ozbay, doctoral students.

Sharma is using advanced computer simulations, including high-fidelity computational fluid dynamics analysis and large eddy simulations, to find the best aerodynamic design for a dual-rotor turbine. Where, for example, should the second rotor be located? How big should it be? What kind of airfoil should it have? Should it rotate in the same direction as the main rotor or in the opposite direction?

Sharma is being assisted by two doctoral students, Aaron Rosenberg and Behnam Moghadassian.

Hu said Sharma’s computer modeling will drive the design of the next generation of experimental models he’ll take back to the wind tunnel.

“We hope to get even better performance,” Hu said.

The idea to look for better performance by adding a second rotor to wind turbines came from a previous study. Hu and his research group used wind tunnel tests to see how hills, valleys and the placement of turbines affected the productivity of onshore wind farms.

One thing they learned was that a turbine on flat ground in the wake of another turbine loses a lot of power production. And that presented Hu and his collaborators with another problem to study.

“When we study more, we learn more,” Hu said. “And therefore we find more problems. In research, the most difficult thing is not solving the problem, it’s finding the problem.” 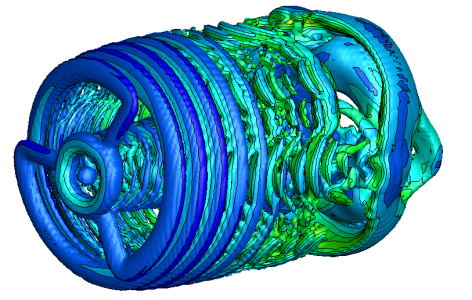 This large eddy simulation shows air going through a dual-rotor wind turbine. (The three lines at the front are the blades of the main rotor; the secondary rotor is embedded in the ring near the center.) By tailoring the rotation and turbulence behind the turbine, Iowa State engineers say the dual rotors can boost the recharge of wind loads. And that can improve the energy harvest of wind farms. Larger image. Image courtesy of Anupam Sharma.

Iowa State University aerospace engineers are developing dual-rotor technology to improve the energy harvest of wind turbines. They say the second rotor helps make up for inefficiencies caused by the shape of today's turbine blades and helps recharge the wind loads behind turbines. The combined effect is an 18 percent increase in a wind farm's energy harvest.

“To try to solve these problems, we put a small rotor on the turbine. And we found that with two rotors on the same tower, you get more energy.”

“These are fairly mature technologies we’re talking about – a 10 to 20 percent increase is a large change."