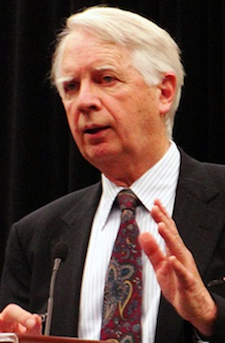 AMES, Iowa —Tom Twetten, an Iowa State University alumnus and veteran of 34 years in clandestine services for the Central Intelligence Agency, will speak at Iowa State at 8 p.m. Thursday, April 2, in the Memorial Union Sun Room. His presentation, "Ethical Implications for the Intelligence Community," is free and open to the public. It is part of Iowa State's World Affairs Series, "Redefining Global Security."

Twetten worked under diplomatic cover for the CIA in Africa, Asia and the Middle East. He was deputy and then chief of the Near East Division in the 1980s. During that time, the division was in charge of helping the Afghan people fight the Soviet army invasion and occupation.

He then served six years as the chief of the clandestine service as CIA's deputy director for operations. Twetten directed intelligence resources in support of new democracies in Eastern Europe, supported a coalition of allied forces in the Gulf War following Saddam Hussein's invasion of Kuwait, and placed new emphasis on fighting international terrorism, narcotics trafficking, and the proliferation of weapons of mass destruction. In support of the intelligence community, Twetten made the first U.S. Government purchase of the Predator drone. He was twice awarded the Distinguished Intelligence Medal, the CIA's highest intelligence award.

After completing his bachelor's degree at Iowa State, Twetten earned a master's degree in international affairs from Columbia University. He retired in 1995 to Vermont, where he is a bookbinder and dealer in antiquarian books. He is the proud recipient of the 2008 Carrie Chapman Catt Award from ISU for public service.

Twetten's talk is co-sponsored by the World Affairs Committee and the Committee on Lectures, which is funded by the Government of the Student Body.

"Ethical Implications for the Intelligence Community"