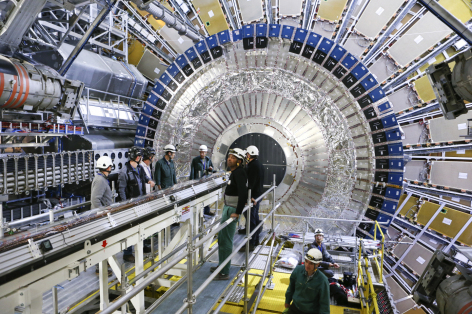 Technicians prepare to install the new Insertable B-Layer into the middle of the ATLAS Pixel Detector at the Large Hadron Collider. Iowa State physicists are part of the Pixel Detector collaboration. Larger image. Photo by CERN, the European Organization for Nuclear Research.

AMES, Iowa – As energies go up, so do the chances of exotic particles showing up in the detectors of the Large Hadron Collider.

And that has four Iowa State physicists and their team of postdoctoral research associates and graduate students ready for some new data from the second run of the 17-miles-around collider near Geneva, Switzerland.

The collider’s first run was full of discovery and excitement. Physicists at the multibillion dollar experiment operated by CERN, the European Organization for Nuclear Research, discovered and measured various properties of the Higgs boson. They believe the Higgs is associated with the field that gives elementary particles such as quarks and electrons their masses.

Experimental discovery of the Higgs confirmed the 1964 theories explaining particle masses developed by boson namesake Peter Higgs and the team of Francois Englert and the late Robert Brout. As a result, Higgs and Englert won the 2013 Nobel Prize in Physics. (Brout wasn’t recognized because Nobel prizes haven’t been awarded posthumously since 1974.)

“From a physics point of view, that’s the most exciting part,” said Prell. “If we want to produce some kind of exotic particles – something like dark matter – the higher energies will increase our chances to see them.”

It all goes back to Albert Einstein’s E=mc². The famous equation says energy is equivalent to mass.

That could mean the huge ATLAS detector – we’re talking 50 yards long, 27 yards in diameter, 7,000 tons and 1,864 miles of cables – could track and measure something brand new to physics.

Iowa State’s physicists are part of the team working with the ATLAS Pixel Detector, which is the innermost layer of the multi-layer machine. During the collider’s two-year shutdown, engineers and technicians added another layer – the Insertable B-Layer – to a tiny, narrow space inside the Pixel Detector.

The new layer is in the middle of the action, right up against the beam pipe containing the circulating particles. That puts it right next to the colliding protons and ions.

The new layer will help physicists more precisely track the trajectory of particles emitted from the collisions. It won’t be an easy job: “That innermost layer will be constantly bombarded by radiation,” said Chen.

Now that the new hardware is in place and technicians are tracking down every last short circuit before the collider is fully commissioned and restarted, Cochran said he’s very much looking forward to higher energy collisions.

“It seems like we’ve been down a lot longer than two years,” he said.

Cochran, the deputy manager of the U.S. ATLAS Operations Program supported by the U.S. Department of Energy and the National Science Foundation, said the collider experiments were fortunate to take measurements of the Higgs boson during the collider’s first run.

During the second run, “If we find something, we need be careful,” he said. “Anything we find will be a really big deal.”

And so these are exciting days for Iowa State’s ATLAS team. In addition to worldwide headlines, the restart will create unprecedented amounts of data to sort and analyze.

“It really takes a lot of effort and a long time to make a big discovery,” Chen said. “People shouldn’t expect anything in a few days. We’re looking for revolutionary ideas. Big stuff. People need to be patient.”

With the Large Hadron Collider nearing its second run, Iowa State physicists are preparing to analyze new data from the 17-miles-around experiment near Geneva, Switzerland. The collider is expected to restart this spring and eventually ramp up to a record collision energy of 13 trillion electron volts. The higher energies could produce new physics.

“From a physics point of view, that’s the most exciting part. If we want to produce some kind of exotic particles – something like dark matter – the higher energies will increase our chances to see them.”