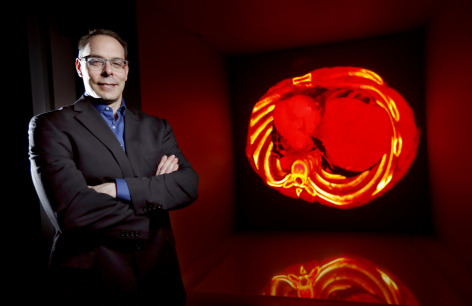 AMES, Iowa – Eliot Winer likes to show off the magic and usefulness of immersive virtual reality. So there you were, in the middle of Iowa State’s MIRAGE lab, taking a shift at a military checkpoint.

In this case, the lab’s mix of virtual and real worlds put you behind the barriers protecting a strategic stretch of road. A white pickup showed up on the 33-foot by 11-foot screen in front of you and turned up the road. Suddenly, a man jumped out of the pickup and ran behind a van.

Sensors around the lab track and record your movements to the millimeter. If you shoot your fake but realistic-looking rifle, the computers running the MIRAGE lab know where the bullets are flying.

MIRAGE, the Mixed Reality Adaptive Generalizable Environment, is part of Iowa State’s Virtual Reality Applications Center. It was built to test training ideas for the U.S. Army Research Laboratory. It mixes virtual reality elements, including 3-D images on the giant screen and surround sound, with real-world walls, barriers and other props. Put it all together and you can be in the middle of a war zone.

There are lots of other examples in Winer’s research portfolio: developing product design tools for John Deere engineers, building a system to control drone missions for the Air Force Office of Scientific Research and creating visualization technology for doctors planning surgery or students learning anatomy. He’s even part of the team building a virtual visit to Jack Trice Stadium so football recruits can experience the sights, sounds and traditions of game day.

“We focus on the interface between people and computers,” Winer said. “Humans evolve slowly – we’ll have 10 fingers and 10 toes for the next 10,000 years. But our machines are getting much faster and more complex. Without better interfaces, we can waste all of that functionality.”

Winer was a college recruit himself. A 6-foot-5 kid with a 40-inch vertical jump, he was a prototypical middle hitter on the volleyball court. He knew he was never going to make a living playing volleyball, so when he evaluated universities he looked at engineering programs.

Ohio State had a strong program in aerospace engineering and so he became a Buckeye. (And he still is. You don’t have to look very hard to find some Buckeye gear around his Howe Hall office.)

Next up was graduate school at the University at Buffalo in his New York hometown. With the military dropping its R&D spending, Winer decided to switch to mechanical engineering because aerospace jobs were declining.

He earned his master’s, worked two years running a startup company and did some computer consulting on the side. That’s when he started learning operating systems and programming languages.

When he was ready to go back to Buffalo for his doctorate, he took a course in multidisciplinary design optimization – the process of designing, say, an airplane wing while accounting for all the design considerations (including the physics and the costs) to come up with the best overall product. His professor was Christina Bloebaum – now Iowa State’s Dennis and Rebecca Muilenburg Professor of Aerospace Engineering.

“The idea was that there was so much data one person couldn’t deal with the reams and reams of spreadsheets,” Bloebaum said. “So let’s represent the data visually and in a way that allows us to make changes in real time and see what they look like.”

Bloebaum says Winer was a change agent then and is one now.

“Certainly his Ph.D. work was at the forefront,” she said. “In the wake of that, people started doing similar research. He’s continued along those lines since he’s been here. And not just in mechanical engineering, he’s also engaged in the biology side of things.”

Winer, who joined Iowa State’s faculty in 2003, was at his office computer on a recent afternoon, working away at coding errors.

They were some of the final tweaks to make medical visualization software from his lab run on an iPad. The technology is used in commercial products marketed by a startup company called BodyViz. The company was launched in 2009 by Winer and co-founders James Oliver, a University Professor at Iowa State, the Larry and Pam Pithan Professor of Mechanical Engineering and the director of the virtual reality center; and Thom Lobe, a pediatric surgeon with Advocate Health Care in the Chicago area and formerly with Blank Children's Hospital in Des Moines.

Their technology converts the flat images of medical scans into fully interactive 3-D representations that, with the help of a video game controller or iPad, are easy to see, manipulate and understand. The technology is giving doctors and medical students a unique and accurate look inside a patient’s body.

It’s the kind of research challenge that attracted Winer to university work. He likes changing the game for doctors, soldiers, engineers and students.

Just ask Vijay Kalivarapu, a staff scientist at the virtual reality center, how Winer has influenced him.

Kalivarapu was one of Winer’s graduate students at Buffalo. He credits Winer with helping him develop the capabilities for high-level academic research.

One of those lessons was where to start when facing a complex problem: “Start simple, that’s what an engineer should do,” Kalivarapu remembered Winer telling him. “Start simple and achieve the bigger objective.”

At the Virtual Reality Applications Center, the bigger objective is developing technologies that help people use data, see solutions and make decisions. Winer says it’s a job and a place that’s never dull.

Eliot Winer has a research portfolio full of virtual reality tools that can help doctors, soldiers, engineers, designers or students work with data and make decisions. He's even part of a team developing a virtual visit to Jack Trice Stadium so more recruits can experience a Cyclone football game.

“The leading edge is a cool place to be.”

Eliot Winer, an associate professor of mechanical engineering and an associate director of the Virtual Reality Applications Center