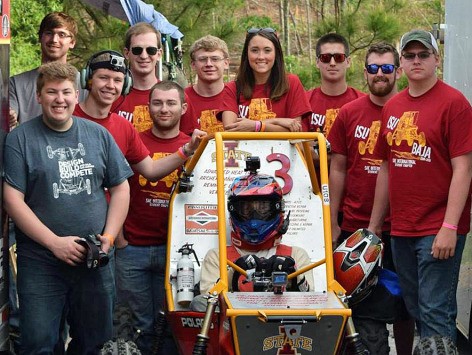 6-2-15 update: The Iowa State Baja SAE Team was camped in eighth place for some 45 minutes of the all-important endurance race at the Oregon competition. But then, as so often happens in the four-hour race, a part failed. In this case, a rear suspension mount gave way and instead of running with the leaders, Iowa State’s mini off-road racer was running toward the pits. But the team made a quick weld, re-attached the suspension and ran to a 21st-place finish. The team’s top finish in the entire competition was 13th in maneuverability. The team finished 19th overall. “We didn’t do as well as we thought we would,” said Zach Verbeck, the project director for this year’s Baja team. “But, we’re excited to be back on campus and start gearing up for next year.”

AMES, Iowa – It was a Friday afternoon and there was Zach Verbeck in the back of the Cyclone Racing garage, working away on a homemade brake dyno, looking for data that could improve the performance of Iowa State’s mini off-road racer.

The senior from Cedar Falls who’s studying mechanical engineering was taking torque readings in foot-pounds. He hoped the information would help him and the rest of the student-engineers on Iowa State’s Baja SAE Team find just the right combination of brake pads, calipers and rotors.

He was looking for any marginal gains that could turn the team’s early season top 20 finish into a better result.

Last month the team competed in the Baja SAE event in Auburn, Alabama. The annual series of three contests features student-designed and student-built off-road racers. The contests are sponsored by SAE International, formerly the Society of Automotive Engineers. 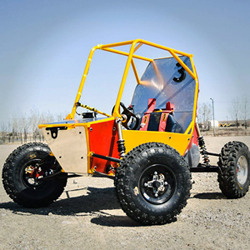 In Alabama, Iowa State’s team finished eighth in land maneuverability, 14th in sales presentation, 17th in acceleration, 20th in the hill climb, 25th in suspension and traction, 26th in cost and tied for 30th in design. But, in the premier event – the four-hour endurance race worth 40 percent of a team’s possible score – the team finished 34th. Overall, Cyclone Racing finished 20th of 92 registered teams.

“In the endurance race, we had a couple of setbacks that were really minor, but they held us back a lot,” said Verbeck, the project director for this year’s Baja team.

First, the lower A-arm of the right-front suspension wasn’t connected properly. It came lose and the team lost 40 minutes for a tow to the pits and repairs. Then, the team was black-flagged when a rock broke through one of the car’s plastic side panels. The team had to hustle back to the pits to quickly tape over the hole.

But, when the repairs were done, the car was good and fast over the course’s mud, rocks and logs. So the race could have been so much better.

“We’re not discouraged,” Verbeck said. “We know we have a good car.”

He explained a couple of this year’s innovations, noting it would take a budget of about $70,000 to build the car and project from scratch:

So, when team members head for their next competition in Portland, Oregon, May 27-30, Verbeck says they’re looking forward to better racing.

“We’re getting geared up for Oregon,” he said. “We expect a lot higher performance for this car. We’re optimistic.” 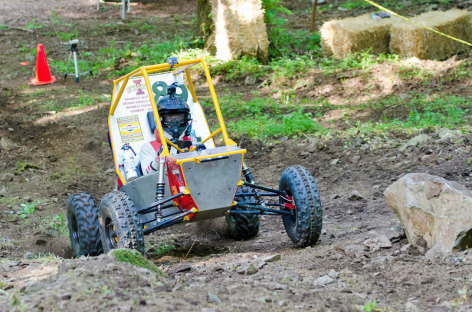 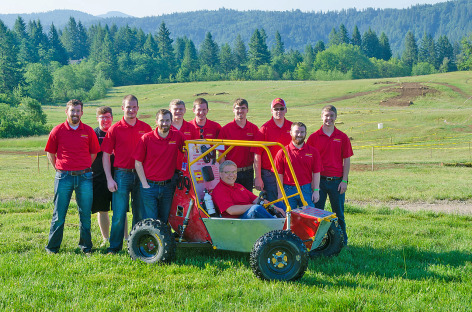 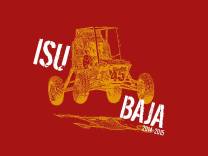 Check out the bumpy competition in Auburn, Alabama.

The student-engineers of the Iowa State Baja SAE Team are working to build on a top-20 finish at a recent competition in Alabama. They're confident they have a car that's durable and fast enough to move up the rankings. They'll race again May 27-30 in Oregon.

“We’re getting geared up for Oregon. We expect a lot higher performance for this car. We’re optimistic.”